There are many tutorials that use a pull-up or pull-down resistor in conjunction with a switch to avoid a floating ground, e.g.

Many of these projects use a 10K resistor, merely remarking that it is a good value.

Given a a particular circuit, how do I determine the appropriate value for a pull-down resistor? Can it be calculated, or is it best determined by experimentation?

Quick Answer: Experience and experimentation is how you figure out the proper pullup/pulldown value.

Long Answer: The pullup/down resistor is the R in an RC timing circuit. The speed that your signal will transition will depend on R (your resistor) and C (the capacitance of that signal). Often times C is hard to know exactly because it depends on many factors, including how that trace is routed on the PCB. Since you don't know C, you cannot figure out what R should be. That's where experience and experimentation come in.

Here are some rules of thumb when guessing at a good pullup/down resistor value: 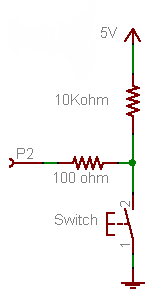 You do not need a resistor, as long as you set up the pin to be input. The current protection resistors are necessary only in cases where the Arduino pin is used as a current source, i.e. output. If the pin is used as an output pin, you may need a current-limiting resistor, depending on what is connected to the pin. Usually we don't connect switches to outputs though (except for unusual cases when the switches need power, switches are actually circuits, etc).

For an input pin you may want a pull-up or a pull-down resistor. However, all AVR chips have built-in pull-ups. After you configured the pin as an input pin, you activate the pull-up resistor by digitalWrite(HIGH) to that pin, or, as @mpflaga points out, on the newer Arduino toolchain, you can set the input mode and pullup using pinMode(in_pin, INPUT_PULLUP); line. See here for more information on pull-up/pull-down resistors.

If you want a discrete pull-up resistor (i.e. not use the built-in one, though I don't know why you would do that) the circuit would look as follows: 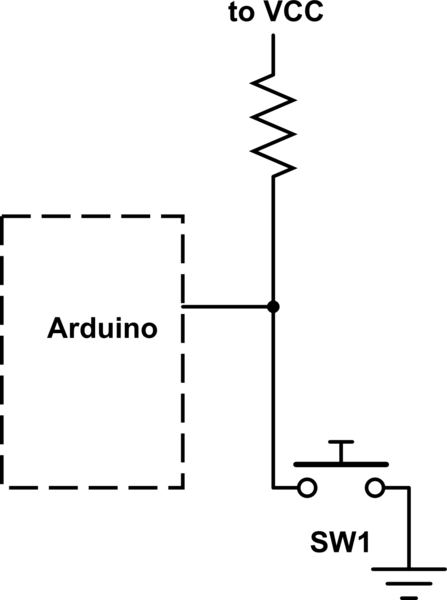 The pin will read high when the switch isn't pressed, and low when it is.