I am learning how to use an oscilloscope and I have just seen this picture in my textbook: 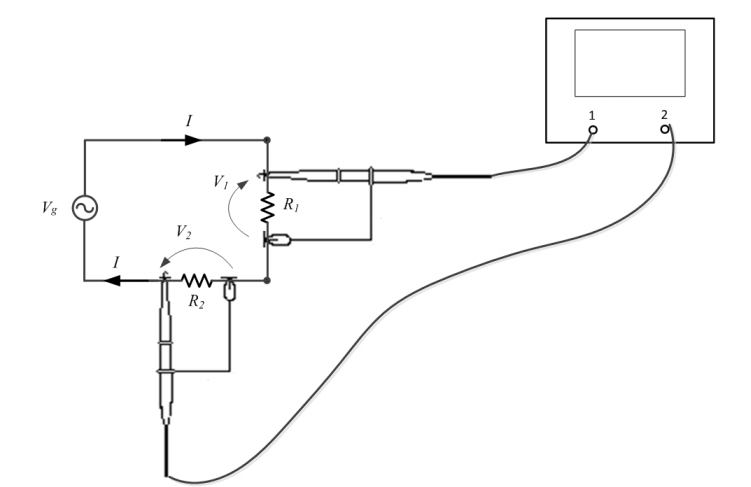 I'm not very sure, but I think the arrangement of the probes is incorrect. Isn't the alligator clip connected to the ground already? This will cause a short-circuit and it would damage the oscilloscope, wouldn't it?

The circuit as drawn has no earth connection so it is isolated from earth. You can, therefore, connect any single point of it to ground without a problem.

Note that the circuit correctly shows both alligator clips connected to the same point in the circuit. If the probe and clip on R2 were swapped then R2 would be shorted out by the earths through the oscilloscope. That could be very bad in a high-powered circuit!

Note also that the probes are measuring voltages away from the common point so the waveforms will be inverted relative to each other. Most 'scopes have an "invert" function on one or both traces to cope with this situation.

Electronic – the ground port on an analog oscilloscope for

Most oscilloscopes have a safety ground. This connects to the earth ground on the plug and also to the case. The thinking is if you wire it up wrong worst case you trip the GFI/RCD instead of shocking yourself or damaging the instrument.

As an oscilloscope is usually a bench instrument it is not isolated from the mains. You can use an isolation transformer, but this is not recommended, as it removes this protection leaving the earth ground floating.

Tektronix sells an oscilloscope which has fully isolated inputs, I don't know of any other models. It is significantly more expensive to add high speed isolation circuitry. Usually it means the whole analog and acquisition side must be isolated.

The ground should always be connected to your circuit's ground or you will get strange behaviour. Trust me. I've spent hours looking at a trace wondering where the noise was coming from, just to find I haven't properly connected the ground.

Electronic – How to attach (safely?) an o-scope to various sources

Russell's answer is excellent as usual, I just want to add a bit extra.

The amount of protection and rating of front end components can vary pretty widely from what I've seen. For instance I have seen schematics for scopes rated for something like <50V input with no protection other than a 10k resistor in series with the opamp input.
In comparison you can get old (and probably new although I haven't seen inside one) tektronix scopes with >600V rating and heavy duty protection.

The only safe way to know what the limit for your scope is to read the manual carefully. If they sat you can probe mains voltage with the probe set to 1x then it should be fine - if it's under warranty and it breaks then you are covered anyway. However, heed Russell's advice about transients - if you have to probe mains voltages, whatever the input is rated for I would use a probe with 10x or 100x setting only, so you can't accidentally set it to 1x (see below)

Personally, I rarely probe anything high voltage on my DSO (OWON SD8202) - I use my big old tank of a scope (Tektronix 7633) for stuff >100VAC with a 10x probe and the DUT run from an isolation transfromer. I must admit a long time ago I accidentally used 1x probe setting for 230V (UK) mains on the Tek a few times and it never complained, although I certainly wouldn't recommend this to anyone - I mention it just to give an idea of how well these things were built (guess they assumed some idiot was gonna come along and do silly things like this :-P )

As far as the ground clip goes, on most plug in (to wall plug) scopes this is directly connected to earth ground.
In floating (i.e. no connection to mains ground through anything - USB, charging leads, etc) battery powered scopes with plastic cases then floating measurements may be taken, but as always, follow the manufacturers advice. What this means is that if you attach the ground clip to anything that is ground referenced (like the mains live wire) and at a potential higher than earth ground, it will create a low impedance path for current to flow (i.e. a short)
Ground referenced means, that one side of the potential is connected to ground - with mains voltage, when the utility wires come into your house, they are split into live, and neutral/earth (which are both connected to each other)
The earth wire is at the same potential as the neutral, but is not meant to carry current under normal circumstances - if there is current flowing in it (for instance if a live wire has fallen against a metal chassis connected to earth) then there is a fault.

If you isolate the ground referenced mains voltage using a transformer, then (as long as the secondary has not been connected to earth) you can connect your ground clip to either side of the secondary and be safe, as the current does not "want" to flow through it (aside from a small amount of capacitive leakage current)

If in any doubt, a good idea is to measure to see if there is any common reference between your ground clip and whatever it is you want to connect it to.
For example, say you have an unknown power supply with two leads and you want to figure if they are ground referenced - one way is to connect one multimeter probe to ground clip and the other to either wire to see if you get any voltage.
Another way is simply to unplug the unknown supply and measure continuity from it's earth plug pin to the output connections - if there is no continuity (or extremely high, say > 1 Megaohm) then there is no reference to ground.
Just in case it's a transformerless supply (or just a badly designed one) you should check that there is no continuity from the live and neutral pins too.

If still in any doubt, don't connect anything up until you completely understand everything.

There are also differential probes (example) you can buy for any scope that can be used to measure the difference between two floating voltages.

Here are a couple of references on grounds/probes:

All About Circuits - Electrical Safety - not about scopes, but very useful information about electrical safety. The section on "Safe Circuit Design" is particularly relevant. Note this does not deal with isolation transformers though (although there is plenty on transformers on another part of the site)