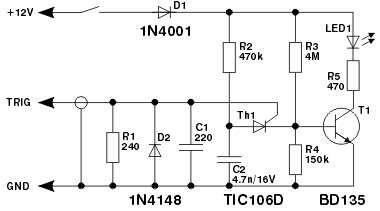 Here the schematic as modified:

When I apply it to the spark plug HT lead, the LED flickers as it has to do, but it is barely switched on.

The trigger cable is connected to the spark plug lead insulation via a crocodile clip and it collects the signal via capacitive coupling with the cable.

The trigger cable is an audio cable, which I believe is shielded. I've connected the shielding to the battery – pole)

I think that maybe the trigger signal collected is not enough to open the thyristor and the transistor.

Is it possible to calculate the capacitive coupling?

I would like to try to simulate the trigger signal with a Keithley power supply. Which current and voltage do I have to set, in order not to destroy nothing?

I have used such a circuit for my ostroboshcope. For picking up the signal you will have to use a pick up coil. As it is not to be found ready made you will have to make your own. First lets make a bobbin for pick up coil. Take a piece of cardboard about one inch in width and wrap it very loosely around the ignition cable and paste the end of the cardboard strip to the wrapped cardboard with glue. Now the cylindrical bobbin is ready and wind about 100 turns around this bobbin using 34SWG enamelled copper wire. Solder leads of the coil to a screen wire and connects these leads to your in put directly. When you want to check an ignition wire, remove the spark plug top , insert the ignition wire through the bobbin of the pick up coil and fix the spark plug top. Thats all . And change the resistor at input to 1000 ohms.

Electrical – using a magnet to trigger a traffic light

Probably any magnets do not help at all. The vehicle detection by induction loop relies on variations of inductance by large metal (ferromagnetic) object standing over the loop. The inductance is measured on AC, DC magnetic field from any permanent magnet just falls out of detection.

Briefly, you need a ferromagnetic object of a car size to trig the detector.

The diagram is for the pure inductance only. In other words, the voltage shown there is the voltage across the inductor only, and the current is only the inductor current. These values are always 90° out of phase.

When considering the series or parallel combination of an inductor with a resistor, it gets a little more complicated. In a series circuit, the current through both components is identical, but the voltages have different magnitudes and phases, and their sum has a phase angle of somewhere between 0° and 90° relative to the current.

Similarly, in a parallel circuit, the voltage across both components is identical, but the currents have different magnitudes and phases, and their sum has a phase angle of somewhere between 0° and 90° relative to the voltage.