Following up on a question I asked some time ago: Simple Implementation of BiSS C interface for a position encoder. I have implemented a simple BiSS master (point to point) to communicate with an encoder. At frequencies below 2 MHz and short cable length, the software is working perfectly using SPI module on PIC microcontroller.

However I tried high speed (3 to 10 MHz) and a 10 m cable, which should work. I stumbled across a propagation delay issue. It appears the protocol needs an implementation of cycle by cycle delay compensation. 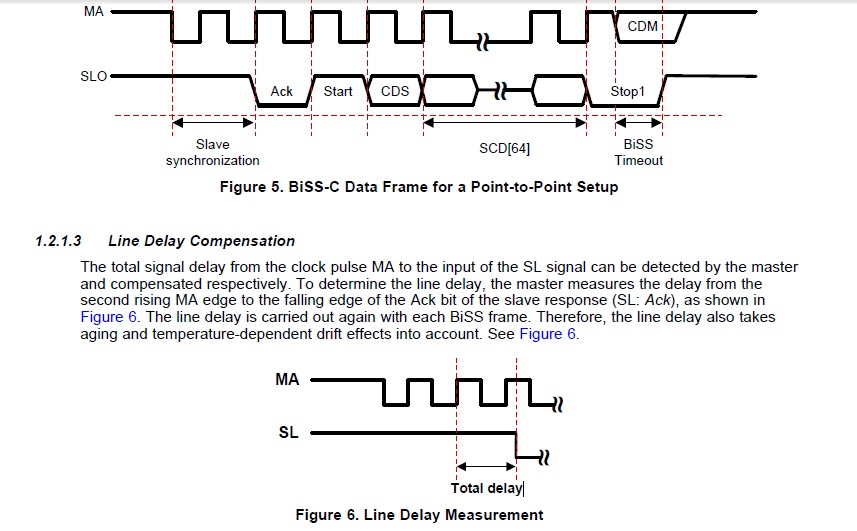 I tried an approach in which I depend on the start sequence (ACK and Start bit) and I shift the result by 1 or 2 or 3 bits depending on how many clocks was the start bit late. But it does not work all the time, the problem seems to be that the data might be shifted by any fraction of the clock (ex.: 1/8, 1/4, 1, 1.5) so MISO is not decoding at the right time all the time.

Does anyone have thoughts on proper way to implement such function in microcontroller? (I can add a couple of discrete componets and logic gates if necessary) but not an FPGA. 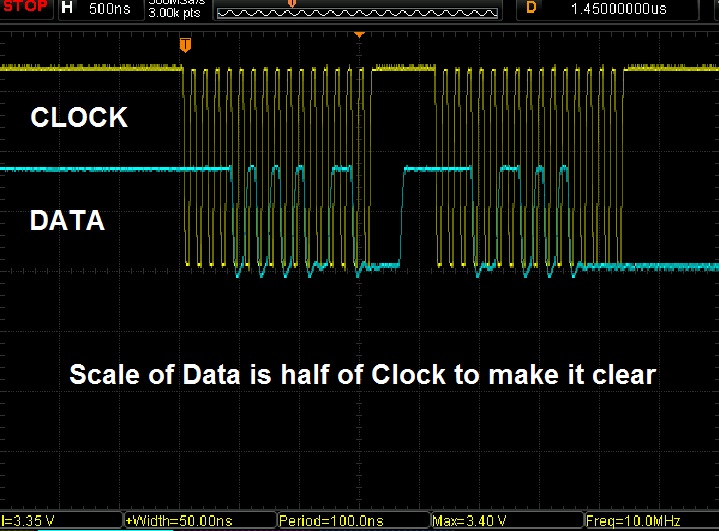 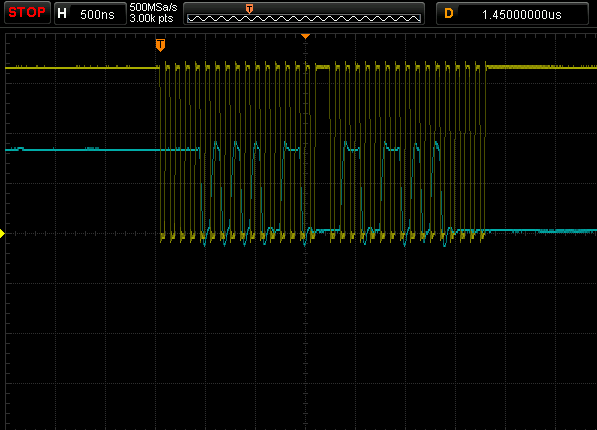 Screen shot when using Buffered mode , 2 spi writes . Note the signal is clean , but the oscilloscope probe and ground pin was not idle when taking the photo.. 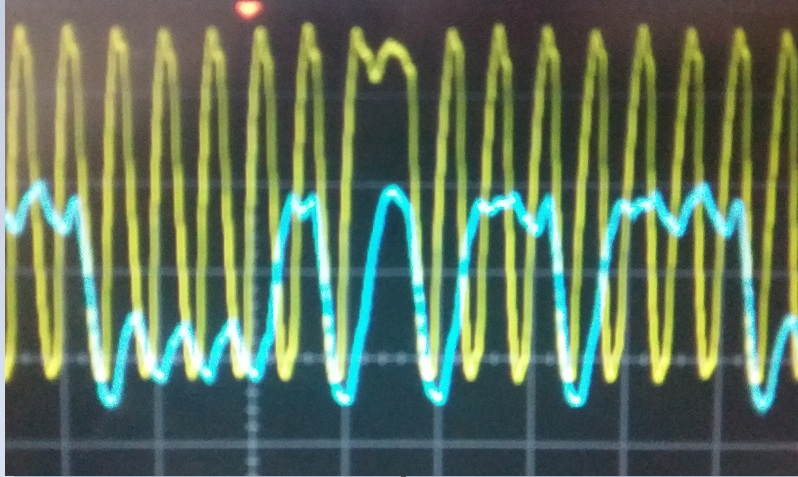 I assume that the delay is somehow constant or with small jitter and the signal gets to SPI in good shape.

Updated after OP's observations that SPI communication is not back to back as I assumed so some bits are lost between frames.

Update after Andy's hint, the right solution is to use both BISS sensor and PIC SPI in slave mode and generate two clocks either externally gated by a PIC output or internally using timer output compare, or other way

With both clocks idle in "1" start DMA for SPI receive, start BISS interface clock, pool the ACK bit then start PIC SPI clock. Sampling in the middle will ensure enough hazard margin. The data will be aligned in words, no shifting is needed. The second DMA for dummy transmitting is no more needed.

It might be possible depending on the PIC capabilities that the SPI clock pin (input because we use SPI in slave mode) to be driven by using PPS without using another pin and external hardwired connection.

In this case, using software shifting as below, the board can be used without any hardware modification.

To get reliable readings first thing to do is to change the Data Input Sample Phase bit SMPx to sample the data at the end instead of the middle as i suppose it is. Or in the middle if it is on the end now

(The image has a mistake, the first edge of the "sample at the end" is not an active reading edge.)

It would be better to know by software which sample edge is better to use.

The description is made for SPI slave shifting data on the first falling edge, for the BISS interface that shift ACK on the second rising edge you can make the necessary corrections adding 0.5 Tckh or 1.5 Tckh to the delay.

That will give you a half clock period approximation of the delay. Use that to choose the sampling point for the clock you actually use Ck (Tck period). If the speed you use it's at most half then it's enough.

Update, corrected the inverted representation of the signal in the text and add some graphic for better understanding

Same number of ones using fast clock, delay between 5 and 5.5 Tckh:

Sampling in the middle using fast clock reads an additional "1". Delay between 5.5 and 6 Tckh. (6 "1" for sampling at the middle not 5 as is in the image)

The diagrams were made using WaveDorm online editor

People jump to use interrupts too easily. Personally, I rarely use them because they actually waste a lot of time, as you are discovering.

It's often possible to write a main loop which polls everything so rapidly that's it's latency is within spec, and very little time is wasted.

There might be some things in the loop which happen far more often than others. Perhaps the incoming bits for example, in which case, add more of those tests, so that more of the processor is dedicated to that task.

There might be some events for which the latency of this approach is too high. For example, you might need a very accurately timed event. In which case, have that event on interrupt, and have everything else in the loop.

The key is how a quadrature encoding works: two signals are out of phase, so you can detect direction by which signal follows the other one. Combined, they have 4 states they pass through, but they will do so in opposite order for the opposite direction. I.e. 00-01-11-10- for right, 00-10-11-01- for left. As you see, they'll pass both the 01 and 10 states you're looking for - and the only way to know which way is by checking the next or previous state.

Given that you can guarantee only one encoder rotates at any time, the scaling of the quadrature decoder isn't really an issue. You can start by finding where the port changed and then decode only that transition.

Otherwise, we have the interesting challenge of finding a parallel algorithm for quadrature decoding applicable to microprocessors. A fundamentally parallel operation most of them have is bitwise operations on wider registers. Let's start by finding each channel where a change has happened, given the port arrangement a1b1a2b2 etc, i.e. every 2-bit group belongs to one channel.

If we do ((value&0xaa)>>1)^(value&0x55)) we get a parity value. This can then be xored with the previous parity value, and presto, we have a step signal. Next comes direction.

We have a diagonal pattern, which tends to occur with xor functions. We also have a margin of values that should not be counted (meaning either no step or a missed step). We already found the step function to eliminate those. In essense, all we need is to find the diagonal with 0s in it, so we can invert step to get direction. It looks like the remaining discrimination can be done with b^a':

So, given that we need a'^b' for step and a' for direction, we can save those two bits from the previous step. Our functions are step=a'^b'^a^b, dir=step&(b^a').

It might be possible to optimize the a^b operation to occur only once, but given that I needed either a or b in the other bits I leave that to someone else. Also, this method doesn't discriminate between channels at all; use another mask and finding set bits to detect which channels actually stepped.

Addendum: The algorithm actually gets a lot cleaner if we do not pair the signals in adjacent bits, but use matching positions of separate variables:

So, for one register width count of quadrature decoders, it takes two stored variables, three xor operations, and one extra temporary register (which rarely matters).