[An antenna must have] current flowing along its length, so that the resulting fields radiate that energy into space. (Receiving antennas are just this process in reverse).

[This] explains why you can't just stick a small tank circuit on a board and expect it to radiate efficiently.

I understand this is true from experience, but I don't understand why. I guess the dimension of the antenna changes the fields it produces somehow, but how does this make energy radiate away more effectively? What's an energy radiating away look like?

I do understand the need to tune the antenna. I'm just wondering how after we've tuned for maximal power transfer to the antenna, we get more of that energy to go to the receiving antenna.

Indeed it can be a very good antenna. Look no further than the transistor radios and AM band receivers. In those ubiquitous consumer goods the antenna consisted of a piece of very low loss ferrite with a very high permittivity. This was wrapped in many amp*turns of very fine copper wire. The high permittivity gave the antennas an effective cross-sectional area -due to the permittivity- (If I recall correctly) of a square mile or so, thus bringing the antenna's electrical size up to the dimensions of the wavelength that it was receiving.

On a technical bent, you could consider that the antennae interacted with the magnetic field portion of the radiating Poynting vector. 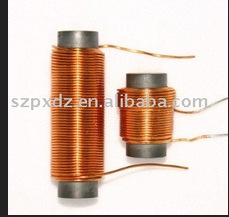 Electronic – How does a Theremin “antenna” work

The fact that theremins use heterodyne mixers has nothing to do with RF. The 'antennae' are not antennae in the classical, RF sense. The capacitance explanation is correct.

When you are operating a theremin, your hand is one plate (your hand is effectively grounded), the antenna is the other, and the air between the two is the dielectric. As you move your hand, you vary the capacitance between ground and the antenna. Both hands will affect both antennae, as they act like two plates in parallel, increasing the total area.

The two antennae are at right angles because that reduces the impact your left hand will have on the right antenna and vice versa. For example, as you move your hand up and down above the volume antenna, it maintains a relatively constant distance from the pitch antenna, thus it's contribution to the overall capacitance is constant (and small).

Note/Update: Please refer to FredM's Answer for a more detailed description of the oscillator.

Both antennae capacitors are part of two different, complex active LC oscillators. The 'L' refers to inductors, which store energy in a magnetic field; the 'C' refers to capacitors, which store energy in an electric field. In an LC oscillator, energy is constantly flowing back and forth between the two, changing from electric potential to magnetic potential.

The frequency of the pitch oscillator is beyond audio frequencies, so it can't be directly used. The theremin has a third oscillator that operates at a fixed frequency. The pitch oscillator and the fixed oscillator's outputs are fed into a heterodyne mixer, resulting in an output that includes the sum and difference frequencies of the two inputs. The sum frequency is even higher than the original signal, thus it is useless and is filtered out. The resulting signal is a single frequency (plus harmonics) in the audio range.

The frequency of the volume oscillator is used to control how much the audio signal is amplified. As you move your hand, the frequency changes, so the amplifier's gain changes, and thus the output volume changes.

Electronic – How to adjust receive-only antenna

Antennas are reciprocal - they transmit and receive equally well (or poorly).

The reason it's important to tune a transmit antenna is because a mistuned antenna, by reflecting power, can destroy the transmitter output stage.

Tuning a receive antenna is much less important, compared to that!

Most receive antenna tuning is frequency sensitive, in fact in the crystal set days, the antenna was often part of the first tuned circuit, and re-tuned for each new station.

With a broadband antenna, there's really not much point making such adjustments.

However you can improve reception by:

if the received signal is weak, increase its height, or use a larger antenna better suited to that waveband.

These can make big differences in reception. If we knew what you are specifically interested in receiving, you may get more specific answers.