I'm developing a project that I would like to use the Ipad capacitive touchscreen(digitizer) with mTouch controller PIC16F707 but by now I have no clue about the specifications of Ipad touch screen. I would like to use it because the OEM Ipad screen is not too expensive.

I know that mTouch controller can handle up to 32 sensor channels.
I got the details of the controller on this website http://www.microchip.com/pagehandler/en-us/technology/mtouchscreens/products.html They even offer a development kit.

Anybody know how would I get a clue ? I did find on internet but found almost nothing. I found this interesting topic here also Capacitive Touchscreen for DIY usage?

No. The touch-panel controllers that you'll have access to are designed for building capacitive button panels like those that might be found above your laptop keyboard or on the side of your TV, not for building high-resolution touchscreens. Quoting the datasheet:

For an example application, check out Sparkfun's MPR121 keypad, which uses an IC that performs a similar function as the capacitive module in your PIC.

You can build a rudimentary X-Y touch panel with 16 horizontal pixels and 16 vertical pixels (or 20 and 12, or whatever) by laying out your PCB like this: 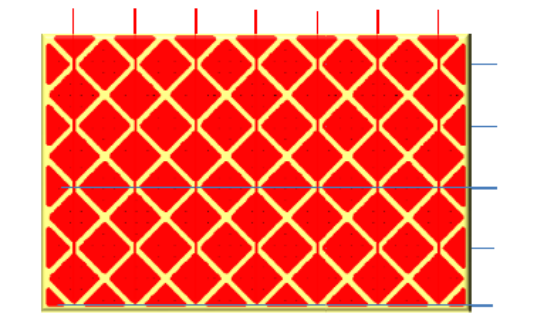 As shown by the blue line, every other horizontal row is connected by a trace on the back side of the PCB.

Real touchscreens are constructed in a similar fashion, but have hundreds or thousands of these rows and as many channels. The rows and columns are laid in transparent metal layers of indium-tin oxide on glass layers. If you have to ask, it's probably not in your budget. If you really want a capacitive touchscreen, you'll be better off reverse-engineering the output of the OEM module with the capacitive sensing already built in. Note that your PIC16 doesn't have the horsepower required to decode this information; you'll need a big ARM processor or an FPGA for that.