I am trying to implement the Hodgkin-Huxley model for simulating neurons using LTSpice. One feature of this model is that the resistances at any given time actually depend on the transmembrane voltage at that time. Is there a way, in LTSpice, to change the values of resistors dynamically in a simulation?

I can find answers on how to vary the value of a resistor in pre-defined increments during a simulation. However, this approach will not work in this case, because I don't know these increments before the simulation starts. Rather, they must be recalculated dynamically from a particular voltage. Does LTSpice (or any other version of Spice, for that matter) have this capability?

EDIT: To be more specific about what the Hodgkin-Huxley model entails, the simulation code I need basically boils down to 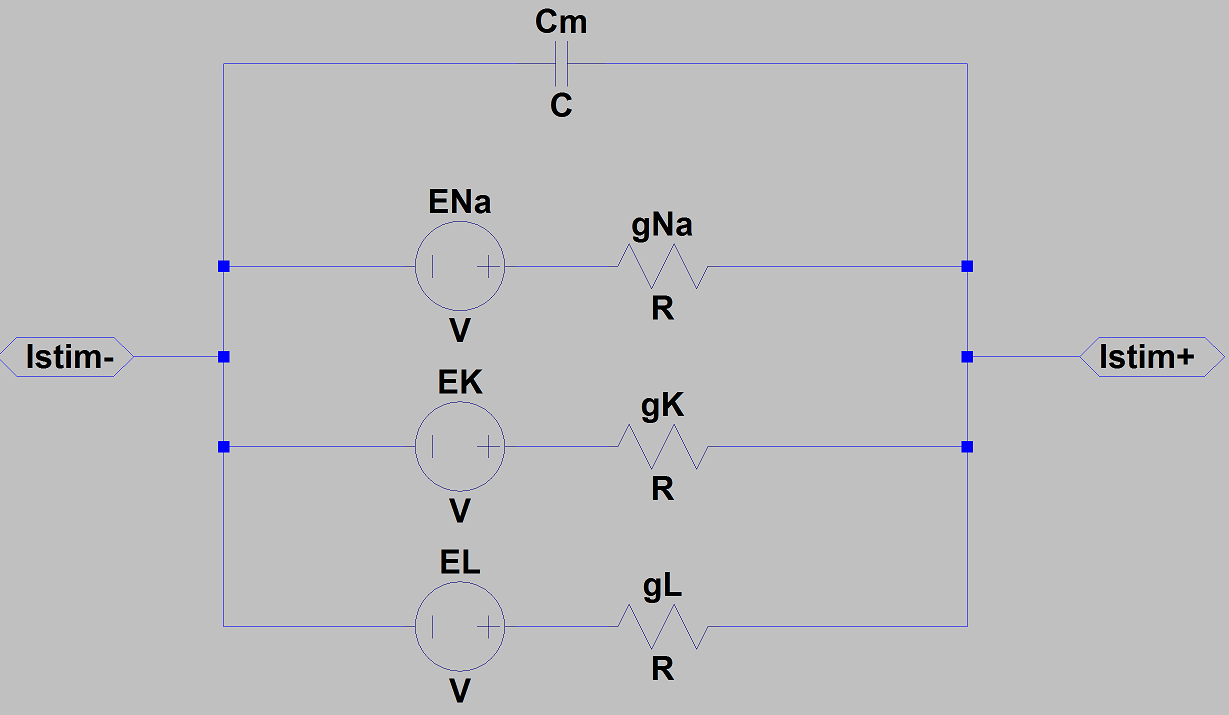 , where the g's represent the conductances, the E's are all constant voltages, gL is constant, and the other conductances all update according to 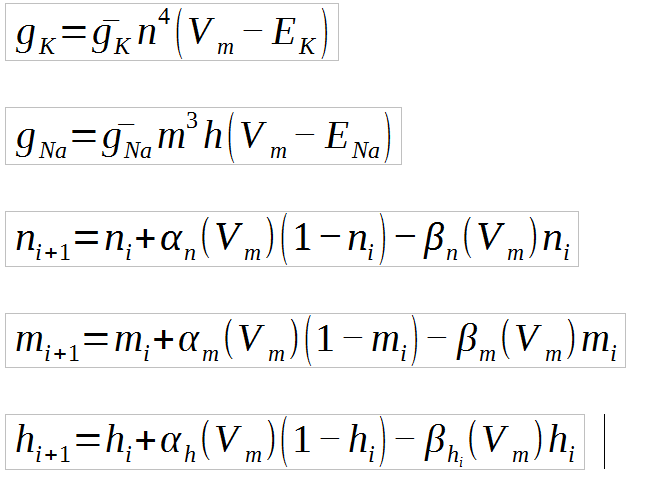 In particular, I need to be able to keep track of the "current values" of the m, n, and h parameters during the simulation because the next value of these variables will depend on them.

I haven't spent much time considering a method for this. But it sounds as though you may have an arbitrary function that computes \$R\$ based upon an applied voltage \$V\$.

(That's just a random function to illustrate the idea.)

Then you could just drop down a resistor, which will default to a value of "R". Now, right-click on the "R" there and get a prompt to allow you to change it. The dialog box should be titled "Enter a new value for Rx". Enter "R={MYFUNC(V(N005,N006))}" or something like that (if you know the node names, use those.) That should allow you to make up an arbitrary function based upon some formula you concoct.

You don't have to use .FUNC, by the way. You can just enter the formula directly into the "R={...}" expression there.

However, the above method has at least one problem. The node names will have to be hard-coded. So this can be a problem as you move forward in a circuit and want the "resistor" to have its value depend solely on a complex function of the impressed voltage on it, regardless of the global circuit node names. For that, I'd go with a .SUBCKT approach.

Here, you'd just drop down an new R like you always do. Then ctrl-right-click the R symbol. Edit the "Prefix" to "X", modify "InstName" to specify "X1" or "X2" or something like that, get rid of the "Value" entry (edit it and delete it), and modify the "SpiceLine" entry to specify a subcircuit name of your choice. Now you have a nice subcircuit symbol that looks like a resistor, but LTSpice now thinks it is a subcircuit.

Now just add a subcircuit. Hit "S" and get the Spice directive dialog box to pop up. Now enter something like this (I'm using the subcircuit name of "XYZ" here):

What I've done above is just use a "G" device. This device can now look at its own terminals, get the voltage from them, and then compute some current based on that. In the above formula, I decided I wanted to mimic a resistor whose resistance magnitude is, ignoring dimensional analysis for now, \$R=V^2\cdot 10\:\textrm{k}\Omega\$. (I squared the voltage to make sure the result is always positive or zero. Allowing zero probably isn't the greatest idea. So just be aware.) Given that, you can work out that the current should be \$\frac{V}{V^2\cdot 10\:\textrm{k}\Omega}=\frac{1}{V\cdot 10\:\textrm{k}\Omega}\$. So that's how I got the equation to use there.

You can do combinations. You can create separate .FUNC functions and use those inside of your subcircuit. You can make the subcircuit as complicated as you want, too.

Electronic – LTSpice simulation of rectifier slows down after short time

The solver is essentially solving a system of differential equations, and there are various algorithms for doing this, some which work better that others depending on the conditions ("stiffness" of the equation - if you know e.g. Matlab/Scilab/Octave see the various ODE solvers there for different conditions)

Depending on the circuit, the solver may have a hard time coverging, and as the Photon says shortens the time scale until it basically just slows down and stops (sometimes if you leave it long enough it will complete the "difficult" part, but often not).
This often happens when ideal capacitive/inductive elements are present, so it's always a good idea to select a series resistance for an inductor (actually defaults to 1m) and also an ESR for a capacitor. Right click on the component to set these and other values (as you probably know)

One other thing is your voltage source appears to be floating from circuit ground - add a high value resistor across the transformer (e.g. 100Meg) Without a DC path it makes it hard for SPICE to determine the nodes voltage.

The last thing I notice about your circuit is you have not selected a "real" diode - this may cause issues also. Right click and select a diode from the list available, I imagine this combined with setting some reasonable value ESR for the cap (and maybe a little more for the inductors) will make it work for either solver.

The circuit below works fine with either solver (cap has 1m ESR):

The output of the AD8222 simulation makes sense. 250Ω for R1 gives you a gain of about 200. Input signal is 1V. The output would have to be 200V, and it gets clipped near the supply rails.
Lower the input amplitude, and/or the gain, and you should see a sine wave at the output.

The output of the LT1920 simulation doesn't readily make sense to me. The gain and the input are roughly the same, so I would expect it to swing and clip like the AD8222 simulation. Hopefully someone can spot the error there.

edit: The negative input pin (In-) in the LT1920 schematic looks odd. Maybe it not connected to ground.