I've got a VTI CMA3000-D01 digital accelerometer and I'm controlling it via SPI from a Texas Instruments CC2540 chip using the embedded 8051 MCU.

In the datasheet for the CMA3000, it mentions that in 2g mode, the output sample rate is 400 Hz or 100 Hz (depending on how the accelerometer is configured). There's also a "Motion Detection Mode" which works at 10 Hz sample rate.

What I'd like to do is change the configuration of the accelerometer to either 400 Hz mode or 100 Hz mode and measure the frequency on an oscilloscope to verify that I've actually made such a change. This is mostly for me to better understand how to make useful measurements with an oscilloscope, and to get a better grasp on SPI.

I've recently purchased a Rigol DS1052E oscilloscope, so I'd like to know how to hook this up to my accelerometer to measure the output frequency, and what settings I need to use on the oscilloscope to make such a reading, and if it's even possible.

I've tried connecting the probe (at 10x attenuation) on the scope to the SCK lead on the accelerometer and the ground lead from the probe to the ground on the circuitboard, then hitting the "Auto" button on the oscilloscope, but it gives me a waveform with a frequency and voltage that jumps around: 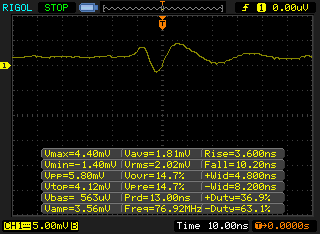 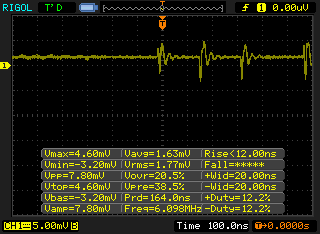 I was expecting to see a square wave with a frequency of 100 Hz (this is what the accelerometer is currently set to in my software), but I got a sine-looking wave. Now the above images may actually be correct, but I don't know enough to determine if they are, which is why I was hoping someone more knowledgeable in regards to SPI and oscilloscopes might be able to give me some direction, or tell me what I need to read to better understand this stuff.

It would also be great to know how to read output from the MISO port on the accelerometer to see what data is being sent back to the MCU. I'm not sure if this is possible to do with only a scope, or if I'd need a logic analyzer to see this data. Thanks in advance.

The problem is that you are using a MEMS digital accelerometer, and what you are reading is the SCK (serial clock) pin of the serial interface. In order to function, that sensor needs to be interfaced with a microcontroller, that sets it for the sampling frequency, the range and so forth.

So you don't have to expect a square wave with 100Hz frequency, but a fast (depending on the bus bitrate) spike, corresponding to a transmission. Expanding the spike, if the scope is fast enough, you should then see the clock square wave inside the spike.

Moreover, if you don't set the SPI interface correctly, the uC will not generate the clock (the sensor operates in slave mode), and you won't read any value.

If you want to see a 100Hz signal, you could probe the Int pin, which sends an interrupt to the microcontroller every time a measure is available. Then, if you handle the interrupt from the microcontroller properly, you wil see the pulse corresponding to the transmission every 10 ms (100Hz).

But make sure that you're not using motion detection; in that case, only when an acceleration is measured, it will generate the interrupt.

To read the data at the SPI port, the simplest thing is to configure the communication with the sensor; otherwise, it won't send data at all. Then, check if the microcontroller is getting the interrupts and if it's reading the data the sensor gives; you can use a timer to add a timestamp to values and check the frequency they come.

You should be able to safely measure the floating linear power supply, as long as you know what you're doing and you're sure that the supply is in fact floating.

So first step is to make sure that the supply is floating. It would be simple to use a multimeter to confirm that there isn't a conductive path between the power supply's rails and ground. Is that is true, you can simply connect oscilloscope probe's ground connector to some point in the circuit. Often this would be the circuit's negative line, but does not need to be.

If the power supply isn't floating (or to say more clearly is grounded), you'd have to connect the oscilloscope's probe ground to the grounded rail of the power supply. That would be usually the negative rail, but could be positive, so to be 100% sure, you'd need to confirm the ground connection with a multimeter.

Here's a diagram of usual probe connections inside of an oscilloscope:

So if you for example connect the ground clip of one probe to negative rail of the supply and the other to positive, you'd have a short-circuit.

Now about the actual measurement itself:

First step would be to see if the probe can handle the voltages and to determine the appropriate probe setting. Usually 10x attenuation is used on probes, since that represents what is usually negligible load on the power supply and provides more bandwidth for the oscilloscope.

After that, connect the ground clip of the probe to the power supply and the probe tip to the point which you want to measure. Some sources recommend that the tested device be powered-off during the connection and that to me looks like a good idea since it minimizes the chances to make a short somewhere where it shouldn't be while connecting the probe. Once you connect the probe, check that the probe is properly connected and isn't touching anything it shouldn't be, like heatsinks (which might be connected to power supply's negative side).

Next step would be to set the oscilloscope trigger voltage for the connected probe a little bit higher (or lower) than the power supply's nominal voltage. This should make the scope trigger on ripple.

After that, turn on the power supply. You should be able to see a (more or less) flat line representing the supply's output voltage on screen and you may see some interference riding on that voltage.

The idea is to zoom in on the interference you see. You could try with automatic measurements and see how they work out. In case they don't show what you want to see, I'll explain how to do it manually. The whole story is explained in the horizontal and vertical settings part of the manual. Basically you use the scale knob to zoom in on the wave you see and then you use the position knob to set the wave on the center. I usually first adjust vertical settings, then horizontal and repeat the procedure until I can clearly see the ripple. Once you see it, you can measure the ripple using the graticule or you can use cursors. Cursor use is explained in the example 5 at the end of the manual for the scope and in the To Measure with Cursors section. When you're using graticule, you simply look up how much time or volts each division represents and then multiply the number of occupied divisions by the value you have. Cursor measurement will usually provide you with more precise result.

So far I haven't mentioned the math menu, because there is no need to use it. You definitely need to reference some point in the circuit to the oscilloscopes ground, since the scope does all measurement with respect to ground. If you connect one probe to the positive rail of the power supply and the second to negative and subtract them, you'll gt same result as if you measured against the probe clip's ground.

Do note that in the case of the isolated linear power supply, you can't get ground loop and have noise, since there will be no current going from power supply's ground through the oscilloscope's ground to the main ground, because the PSU itself isn't ground-referenced and there's no closed loop for current to go through.

A bit about AC coupling: As Vorac says, if you set the probe to AC coupling, you'll remove low frequency signals. This includes the DC component of power supply voltage, which will leave you with only the ripple. This way, you can avoid the need to use vertical position controls to bring the noise into view because it will be already centered to zero volts, so you can just zoom in on it.

Another handy thing are the trigger settings. You can also set filtering to triggering circuit, so that it will work on AC, DC, low or high frequencies. AC trigger coupling will remove all signals under 10 Hz from trigger circuit, so slow periodic signals won't interfere with trigger. LF reject will block all signals under 8kHz and HF reject will block all signals above 150 kHz. This can sometimes be useful if you're trying to focus on only one component of the signal and trigger on it.

Electronic – Not able to read SPI signal with digital oscilloscope

It looks like the test is designed to be done as a loopback test (i.e. with the SIMO/SOMI pin shorted)
If you don't have them shorted, you won't see anything on the SIMO line unless you have a signal input from elsewhere.
SIMO = Slave In Master Out
SOMI = Slave Out Master In
I'm assuming the beagleboard sets itself up as a SPI slave, hence the pin names (more commonly MISO and MOSI)

As far as the scope settings go, x10 for the probe is best as it adds the lowest capacitance load to the line under test (means you can see higher frequencies)

For the timebase and Vdiv, just set things up as needed on the fly. 2us and 1V/div sounds fine to start with. You would often set the Vdiv to a sensible value for the bus voltage to get the signal to fill a large portion of the screen.

Then adjust the timebase in/out when you want to focus on different things, e.g. smaller if you want to check the risetime of the signal, ringing or transients, larger if you want to see more than one byte or stuff like power supply interference.
You will quickly find you are twiddling the knobs constantly when debugging, so don't worry too much about initial settings.