I built a very simple circuit so I could use my Bose headphones in the noisy server room without wasting batteries. I however feel silly that I did not know how noisy USB power was, thus the V(L) power is to noisy for the headphones to function properly.

I'm pretty sure I just need an inductor on the input right? Is that all? If that is indeed all I need I was wondering if someone could provide me with a proper design example with the idea of approaching input noise in general as it was something I never really learned how to tackle.

Much depends what the frequency band of your noise is. For HF noise you'll often use ferrite beads. For instance the Murata BLM18PG221SN1 has a DC resistance of only 100 mΩ but a 220 Ω impedance at 100 MHz.

If you can hear the noise it won't be 100 MHz, unless it's the result of mixing with a frequency in that range, so that difference frequencies occur. Let's assume that it's in the audio band, up to 20 kHz. You'll want to filter it out. The capacitor is one way, and you can improve on it by placing a 10 nF parallel to each of them. But capacitors by themselves are poor filters. They just form a load to the power line, what you need is a second impedance which will divide the noise in combination with the capacitor.

One possibility is a series resistor. That gives you a first order low pass filter with a 20 dB/decade roll-off. This means that above the cutoff frequency the noise will be lowered to 1/10th for each x10 in frequency. It's a start. How low must the cutoff frequency be? As low as possible, then higher frequencies will be more attenuated. For instance for 1 Hz you have 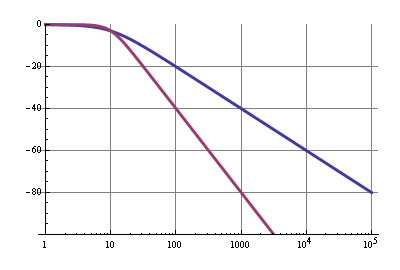 By cascading RC filters you can increase the roll-off. The purple curve has a roll-off of 40 dB/decade. You won't get this characteristic with the sharp cutoff point with passive filters, though. This is the characteristic of an active second-order Butterworth filter. The passive filter will also have attenuation at 10 Hz, but in our case there's no harm in that.

Other filters are pi-filters with two capacitors and an inductor, but at frequencies as low as 1 of 10 Hz the inductor will be impractically large.

If this is indeed an issue of analog/digital separation there are a number of electrical strategies to overcoming it. The easiest of these is to have a separate ground plane for your analog circuitry from your digital cicuitry and join those ground planes at the common return (i.e. the power input to your board). This is called a star-ground topology. I'm not sure what you're going for with the diodes you mention in your question, but you might also consider filtering the VCC to your analog circuit through a ferrite bead and capacitor, and make sure you have adequate decoupling capacitors near all the VCC pins of your amplifiers and other analog circuits.

You need to put your noise source in series with the ideal source: 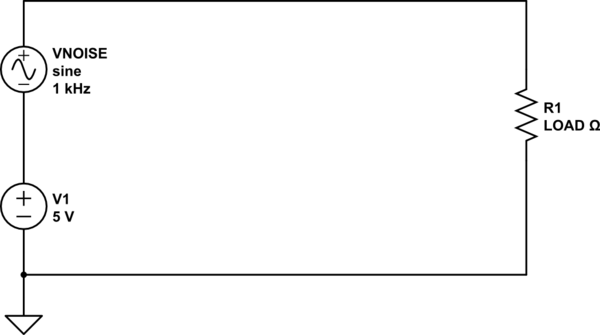