DC current through a very long wire losses its first current, because the wire work as a resistor.

This is the biggest problem when using DC appliances in solar home systems, because there is a very long distance between the battery bank and the load.

So, I consider distributing the batteries through the wire, for example if the wire is 60 meters long and we have 3 batteries, I will put one battery in each 20 meters. 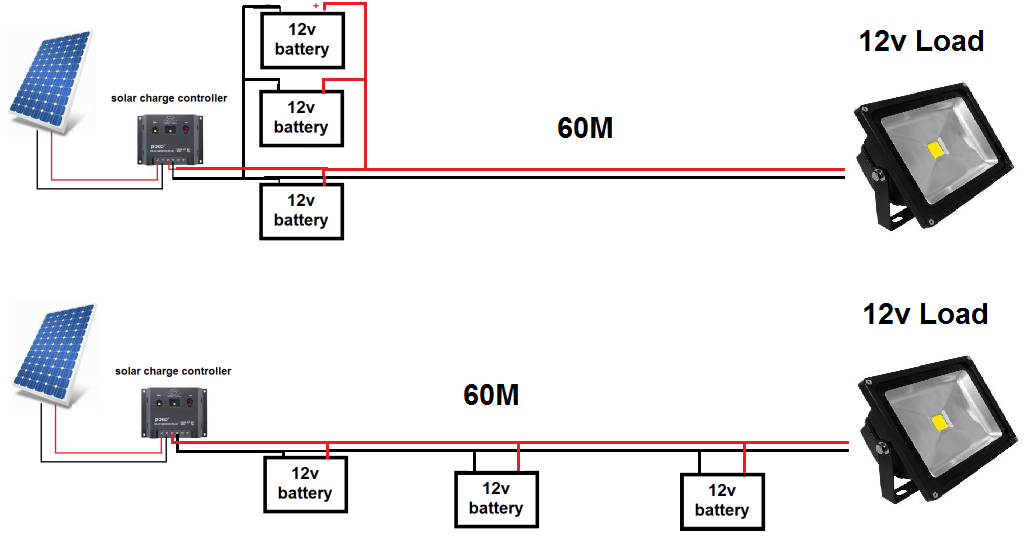 If your wire is long or small enough that there is a significant voltage drop across it, that means in your 2nd configuration each battery will see a significantly different load.

The battery farthest from the load sees the long wires as a resistance in series with the load. Thus, less current will be drawn from this battery.

The battery closest to the load sees very little resistance from the wires in series with the load. Thus, more current will be drawn from this battery.

Thus, the battery closest to the load will discharge faster than the others. This is probably not good, as it puts more wear on that one battery.

Perhaps if the loads are also distributed across the wire, then there could be some merit to this system. However in that case, I think it might make more sense to run each load from an independent battery.

I would say the best solution is to use a thicker wire, which will reduce the resistance of that wire, and consequently the voltage drop and energy loss (and fire hazard, assuming a properly selected circuit breaker).

Another solution is to step-up the voltage on one end, then step-down the voltage at the other end. Or just design the entire system to work at a higher voltage. Holding power constant, increasing the voltage decreases current, and consequently resistive losses in the wiring. This is precisely the technique used by electric utilities, where wires are even longer.

As you can't (or don't know how to) give a current value I can only give some examples.

At 2A the voltage drop would be double that, so the resultant voltage would be 8.64V.

The maximum recommended current for power transmission on that gauge wire is 0.577A. Any more than that and the self-heating of the wire could overwhelm the integrity of the insulation, and even cause the wire itself to melt.

For 3.5A the recommended minimum gauge wire is 16AWG (~1.3mm copper diameter).

Electronic – using a capacitor for an off-grid system

The quick answer is no. A capacitor won't help, AND you don't need it. If you have a 400 - 800 AHr battery, it will provide you with all the juice you need for a small appliance such as you've specified. Additionally, without going into details, practical capacitors simply don't have the energy and power density you want.

If you're worried about transient load currents (as you should be), you need to pay attention instead to your inverter specifications. Inverters don't generally have much excess margin on their load current specs, so you need to get one which seems oversized compared to your average load. The exact amount of this overage will depend on exactly what appliances you're using.

Recharging via exercise bike won't hurt, but it won't help a whole lot, either. The general rule of thumb for humans doing work (like driving a generator) is 100 watts. This is (roughly) the solar power incident at noon on a 1 square foot solar cell. Figure 20% efficiency for the cell, and a 1-hour workout on the bike is more or less the equivalent of an extra square foot of solar cell over the course of a bright day. Like I say, it won't hurt, but its major impact will be to make you feel better about exercising and not wasting energy.

By the same token, running appliances for short periods of time need to be taken into account, but in general they are not dominant in your energy budget. Let's say a blender draws 10 amps at 120 volts. For a really good inverter with a 12-volt input, that's an inverter draw of 100 amps. But, it only lasts for 1 minute, so the total battery drain is 100 amps x 1/60 hours, or about 1.5 amp-hours.