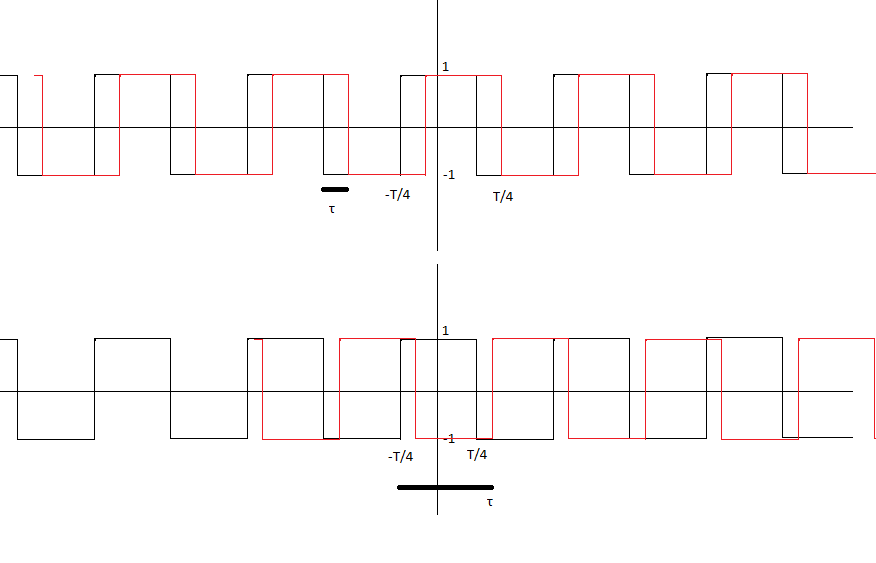 I'm trying to find the \$R(\tau)\$ of this signal, but I'm confused about how to solve the integral.
In the signal above, the red square wave is the shifted signal \$g(t-\tau)\$. I understand the autocorrelation function will be periodic because g(t) is periodic, and will be a triangular waveform.

Any help will be greatly appreciated.

Upto a constant factor this matches with the definition you used.

Welcome to the real world!

The "mathematically perfect" transform you show at the top, with the "discrete" harmonics is generated assuming that the rise and fall times of the waveform are zero, and that you're doing a continuous transform — no discrete sampling in the time domain. It assumes that the integrations are over an infinite span — or equivalently, they're done over an exact whole number of cycles.

When you generate a waveform in a simulator, or feed a real waveform into an oscilloscope, these assumptions no longer hold. The rise and fall times have nonzero values, and the signal is sampled in the time domain. Most importantly, the sampling does not normally encompass an exact number of whole cycles, nor is it precisely synchronized to the waveform.

Violating these assumptions causes the peaks you see in the transform output to "spread out". This does not mean that there's any energy at, say 102 Hz, but only that the limitations of the algorithm means that it can't distinguish between whether or not there's energy there, given the limitations of the set of samples it is working with.

I would think that since a square wave is composed of a sine wave at the primary frequency and a number of odd order harmonic frequencies, there must be a way to add to this and solve it more accurately.

So now, the relative values of harmonics to the fundamental are: -

This of course is a triangle wave: -

So, you input a square wave into an integrator and you get a triangle wave out. How you relate this to "gain" is up to you.