For my experimental methods class (basically an intro to electronics) in university we had to simulate a circuit, which was nothing out of the ordinary, it just produces different sine waves of 2 volts peak to peak. However, what was interesting to me was the fact that, when reading the measurements that the software produced for the Vrms, it seemed to depend on the frequency, contrary to the theory.

Of course, I expected the measurement to be different to the theory, given that simulating it with a computer probably introduced limitations. What I didn't expect was for it to behave so weirdly, having these peaks where it would rapidly decrease and increase again, and ultimately converging to around 702.42 mV, which doesn't make any intuitive sense to me.

I thought that the measured voltage would just stray arbitrarily far from the ideal one, but was surprised when that wasn't the case.

So, why does this happen? It might be a stupid question but when I saw this I got curious and couldn't come up with an explanation by myself (I'm not too far into my studies, so that might be a reason).

Not a stupid question in any respect, as you learned, Vrms should be frequency independent. And it is, your simulation is just reporting wrong values. There is a comment that says it's not a lot of variation, but I disagree. There should be no variation, much less 0.7% error for an experiment like this. You should be questioning this kind of thing. This pattern looks strange if you don't know what's happening.

Knowing the limitations of your tools and how to remedy them is important. Your LTspice program tries to do things quickly. It doesn't want to simulate 10 million points. It wants to do the least work to do the job. As a result, sometimes you will lose some precision.

As an example, lets say LTspice generates 1k datapoints total for your 100Hz wave. Over your simulation time of 50ms, you have 5 total cycles (periods) of that wave. Each full cycle gets 200 points.

Now, lets bump up the frequency to 1000Hz. Let's also say you still only generate 1k datapoints. At 1000Hz, you fit 50 total cycles in your simulation time, resulting in only 20 points per cycle. This loss in resolution makes the waveform more 'jagged', and might result in invalid measurements.

Notice in the figure below the red waveform (especially the peaks) look more pointy than the blue waveform. That's because there are less data points per period for the red waveform, so there is some interpolation going on.

LTspice is a bit more complicated than just simulating a flat 1k datapoints. It has some special sauce in it that if it sees a lot of change it will dynamically change the timestep and start to simulate points closer together. If nothing's happening it may start simulating points further away. This is to save computational power while providing decent accuracy. But sometimes you need to sacrifice some of that speed to get good results. 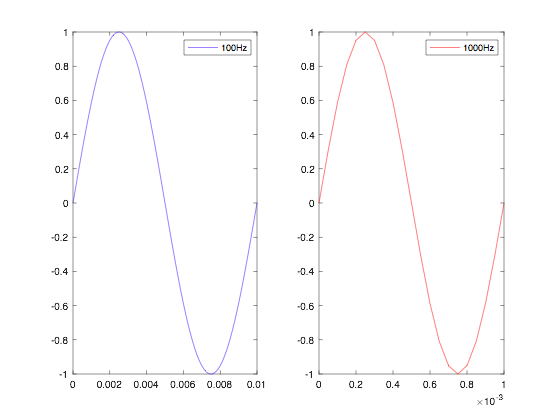 Now how do you fix this? One, you can force LTspice to have a minimum time step. This will give you control over the minimum distance between datapoints. You can also change your simulation time so you only see a few periods of the waves. 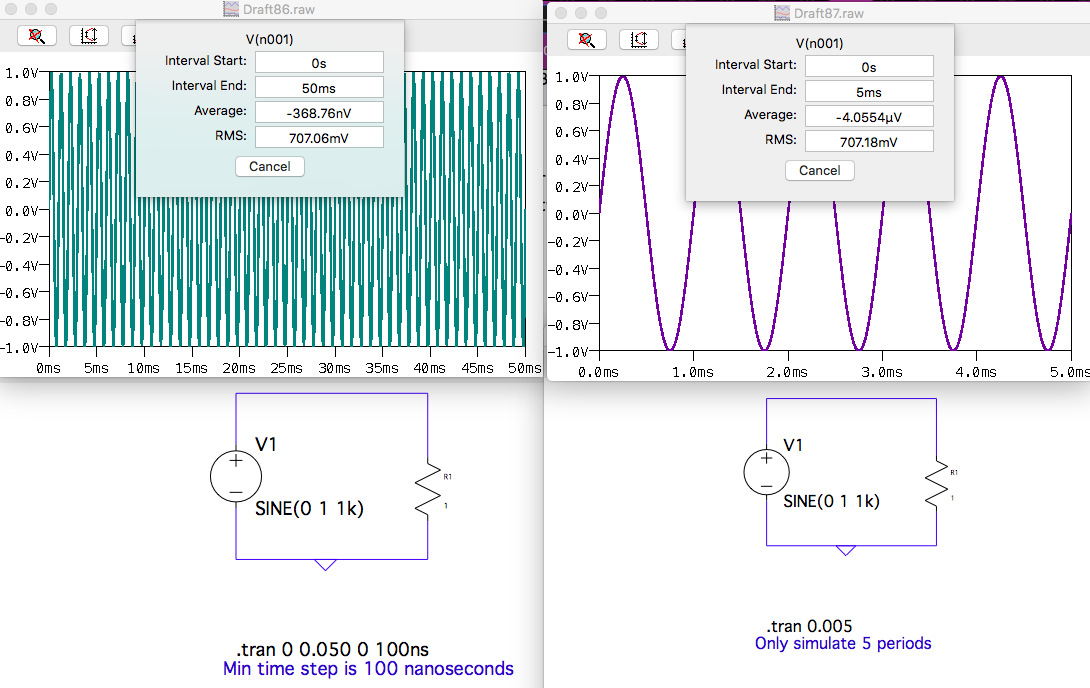 If your lab instructor planned this, they are pretty good. They are showing you that simulations have idiosyncrasies that you need to be wary of. I will be stealing this for when I teach, give your instructor my regards.

Your boost is operating in discontinuous conduction mode or DCM (inductor current goes to zero each switching cycle). The duty cycle becomes a function of load as well as the duty cycle. If you increase the load, the inductor value, or switching frequency, you'll reach a point where you'll see your regulation where you expect it - this is called CCM, or continuous conduction mode. The inductor current doesn't fall to zero, but continuously flows. Your duty cycle formula will be valid here.

20 kHz is very slow for a boost converter. 14A peak inductor current is also unrealistic. Most PFC boost converters operate from 70 to 100 kHz. Lower frequency converters generally need larger inductors. If you want to achieve CCM at 20kHz, you'll need a much larger boost inductance value. Try 470uH in your simulation and you'll see the voltage closer to 12V. (If you had a controller in your model, it would automatically adjust the duty cycle to achieve 12V regardless of CCM or DCM operation).

Because your converter is so heavily into DCM, the switching node voltage resembles the output voltage. If you get closer to CCM, you'll see a clearer picture.

For this simulation, the capacitor is sized such that the switch on-time voltage sag (caused by the load) isn't excessive. In real life, there are other parameters that matter (overall loop stability, ripple current and life rating) that you must consider, along with proper MOSFET choice, reverse recovery and softness of the boost diode...

Electronic – the difference between Vrms and Vm

RMS: The RMS value of a waveform is the DC-eqvalent voltage. It means, that if you have a sin wave with an RMS value of 10 Volts RMS, in order to deliver the same power via DC voltage, you would need 10 volts DC. Don't confuse the average magnitude with the RMS voltage; Vav does not equal Vrms. In fact technically, the average voltage of an unshifted sin wave is 0

Vm: Vm generally refers to the peak/max voltage on your waveform.