I have been trying this miniature Tesla coil based on Slayer's exciter circuit (shown below). The part that I don't understand is how this parasitic capacitor exists? I know that for a capacitor there needs to be 2 opposite charges separated by a distance L (which should not be too large as the capacitance becomes negligible). So how do I visualize the capacitor based on these conditions (opposite charges and distance of separation)?

And even assuming that it exists, initially when the switch is turned on voltage is induced on the primary which is reflected on the secondry side charging the capacitor. But after a while since it's only a DC source the induced voltage slowly fades away, but how does the base emitter diode get reverse biased? I have made the circuit and it works even though I did not have the diode shown in the image, but I just want to get it working right! I did see an earlier post similar to this, but it did not really help with my questions. 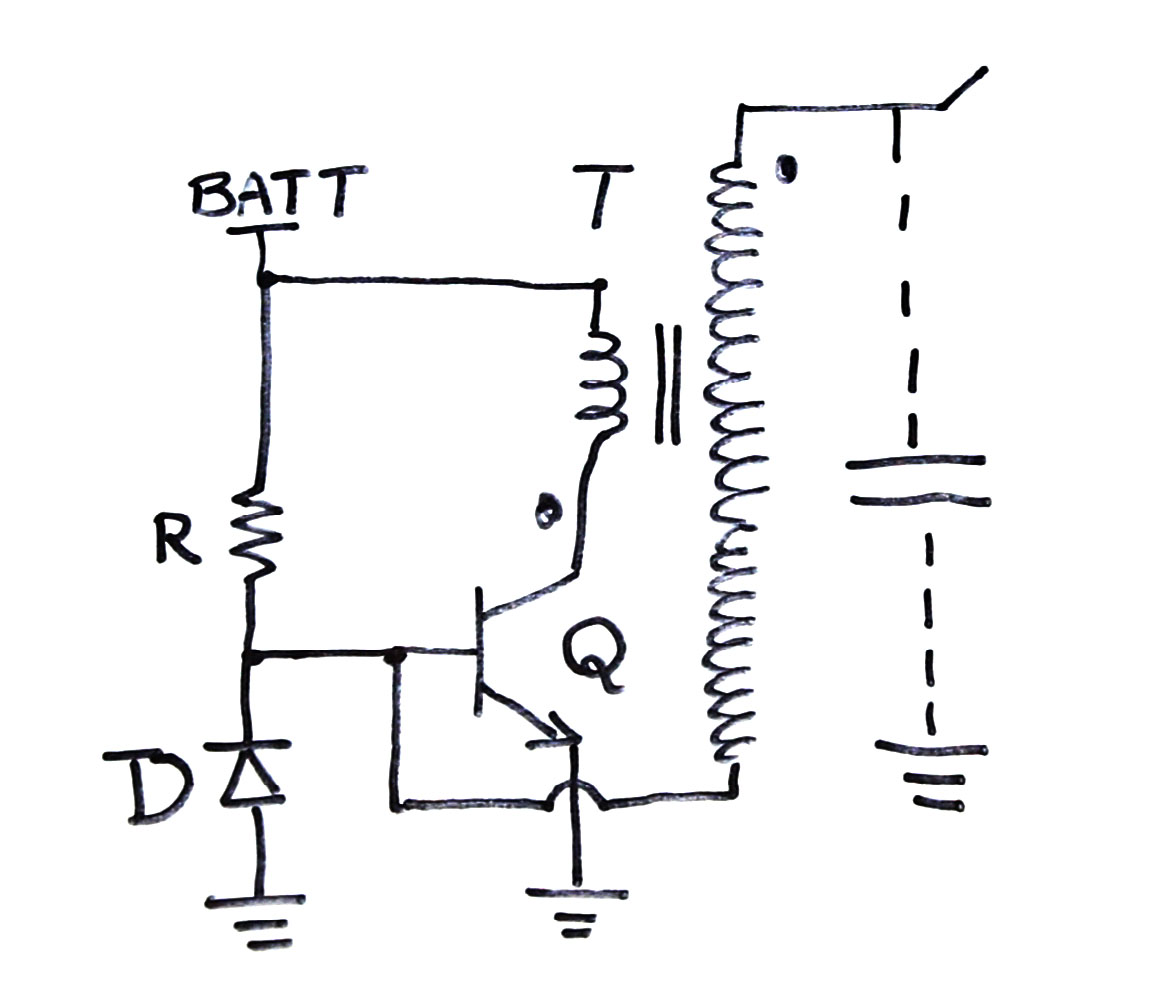 The Slayer oscillator is actually a crude form of a resonant power supply. It runs at a resonant frequency. The resonant frequency is determined by L and C. Switching losses are reduced so that a BJT will run cool at sensible frequencies. You are stepping up so this makes L big and lots of turns make C significant. R has nothing to do with frequency. R is just for starting.

The transformer does have parasitic capacitance to ground. That is why C is drawn the way it is. If there was no parasitic capacitance to ground the oscillator would not work because its feedback path would be broken. Your diode does get reverse biased because AC current is flowing. I have used a red LED in place of D1 to indicate operation and give higher negative voltage on the transistor base to improve turnoff and possibly switching losses.

That is not a Tesla Coil. It is a high frequency oscillator. A Tesla Coil depends on resonance, which means a tuned circuit with a capacitor and an inductor. In the case of a Tesla Coil, it is two matched LC circuits (one with the primary capacitor and primary coil, and one with the topload and secondary coil). The above circuit just oscillates at a very high frequency based on feedback from the secondary coil (the one with 275 turns). When the switch is thrown the transistor turns on due to the current flowing into the base through the 22K resistor. Current also flows through the primary coil (the one with 3 turns), through the transistor, and back to ground. When you get a "burst" of current in the primary coil, it induces current in the secondary coil. The lower end of the secondary coil (assuming both coils have the same priority) provides a signal that turns the transistor off. When the coils discharge the cycle repeats (the transistor is turned back on again and another "pulse" is sent through the primary, inducing current, etc). This oscillates at a very high frequency which creates an alternating current output on the secondary coil. With a turns ratio of 3:275, a 9v input would give you about 825v (roughly speaking) on the output, based on normal transformer operation.;thank you

The conductivity being only two thirds of that of copper wire of the same cross sectional area shouldn't be a problem, especially given a very low current application like a tesla coil secondary.

Enamelled aluminum wire will thus be just fine electrically, but mechanically it is problematic: It won't wet with normal solder, be it lead free or not, unless you actually have copper clad aluminum wire. There are some fancy solder/flux combinations that strip the oxide layer and bond with aluminum, but they aren't exactly common. Even crimp connections of AL with copper/brass fittings are problematic, as such joints tend to corrode, but they should still be your best bet in this case. Another option is to terminate the AL wire with conductive epoxy.