I have The Executioner bug zapper: 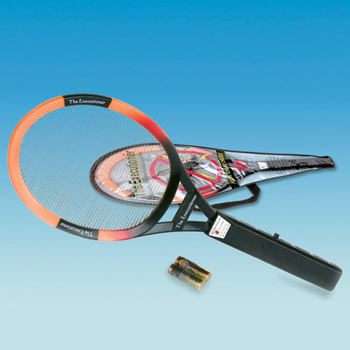 Although it uses 2 AA 1.5v batteries, it also has voltage multiplier like Cockcroft–Walton generator i guess and would like to know if it is safe and would make sense to use multimeter for measuring zapper's voltage output and preferrably resistance as well.

UPDATE: Can i also test voltage output with voltage tester like this? Will it be better than multimeter in this case? 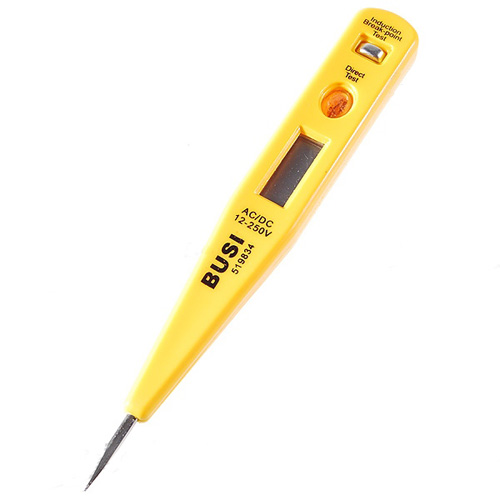 Interesting question - I would say not with a standard multimeter no.

One problem is (if it's similar to one I have seen) the voltage will be very high (>kV region) and the other is it is probably not stable DC, rather I think it is very short peaks (which will probably confuse even the AC setting on most multimeters) although further research says this is probably not the case. In any case, the amount of charge supplied should be very small so it will probably be quite safe. Having a look at the circuit and running the calculations might be a good idea, as the voltage level (alone) is not the full story, the current matters, and although a capacitor can present a very low impedance, the output cap would need to be large enough to source it for a reasonable length of time. You might get a similar (harmless) shock from a piezo spark module found in e.g. a cheap lighter.

Most flyswatters conform to electrical safety standards for humans: a limit on the charge stored in the capacitor. A discharge of less than 45 µC is considered safe, even in the unlikely scenario that the current from a flyswatter would be flowing from one arm to the other arm, partly through the heart.1 This means that the capacitor of a 1000 V flyswatter should be less than 45 nF. Due to this precaution for humans the initial shock is usually inadequate to kill flies. a limit on the current after the initial discharge. The maximal continuous current of most flyswatters is less than 5 mA. This current is safe, even when flowing from one arm to the other arm.[2]

To answer the question of voltage measurement:

With the multimeter, if it short peaks you would need some way to average the voltage and reduce it to measurable levels - filtering with a capacitor and large restive divider would do this but the capacitors voltage rating (high) and leakage (low) would need to be suitable, plus it may be dangerous depending on the size of the capacitor (see above). You might need many megaohms of resistance in the divider to stop any "loading" of the voltage. The average current in needs to be higher than the current out so the capacitor can charge. I'm not sure if this method would be very easy to achieve satisfactory results with.
EDIT - If you can modify the circuit to stop the automatic discharge of the capacitor (i.e. the circuits output capacitor, not an external one as mentioned above) then measure with high resistance divider (e.g. 50:1, total resistance say, >10 megaohm), that is probably the safest way to try, though you will need to factor your multimeters input impedance into things.

An oscilloscope would be better, as there would be no need for the filtering and the input resistance is very high. You could maybe use a step down transformer to reduce the voltage and the impedance of the signal so loading was less of an issue, or use a HV (e.g. 100:1) probe to measure peaks.

If not pulsed (reasonably stable DC)

If it does not automatically discharge/spark or continually pulse charge the cap (e.g. charges up then holds), then measuring without modification using the divider mentioned should be possible, so would make things easier. I think this may be the case according to the Wiki and other pages (maybe the one I saw worked differently, I seem to remember it clicking/sparking)

True RMS measurements is a property the manufacturer will be very proud about to share with you as customer. It is usually printed in bold on the meter itself. True RMS isn't printed on the meter in your example, so it won't be one.

Also I own a more expensive brother of this meter and on that one it says 'True RMS' (in bold print).

Third way to tell is from the specifications. Again the manufacturer will be proud to be able to share True RMS properties and I expect it listed high in the 'key features' and next to the 'ACV' and 'ACA' table headers.

In conclusion: No this is not a True RMS meter.

Electronic – How to check if the multimeter’s fuse is damaged

Measure the resistance of the fuse. If it's very low (close to 0 ohms), it's still good. If it's very high (open circuit), it's blown.

A 200 mA fuse should have a very fine wire visible inside the glass. If it's completely clear, the wire is gone (blown).