Sometimes it feels like a ground-loop is inevitable. Please follow along the following thought-experiment. It would be wonderful if you could provide solutions to the issue described.

Imagine a board where one cannot use a ground plane. There are some chips on the board: 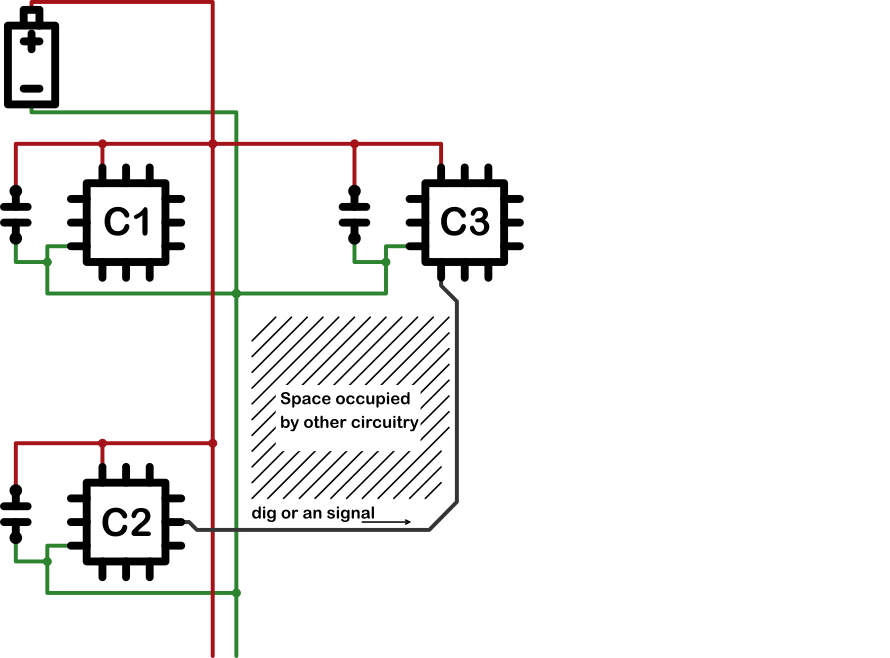 A digital or analog signal flows from Chip 2 to Chip 3. Suppose the trace cannot go straight to the other chip, but needs to bend around some other circuitry on the board.

Now consider the current flow when the signal moves from Chip 2 to Chip 3: 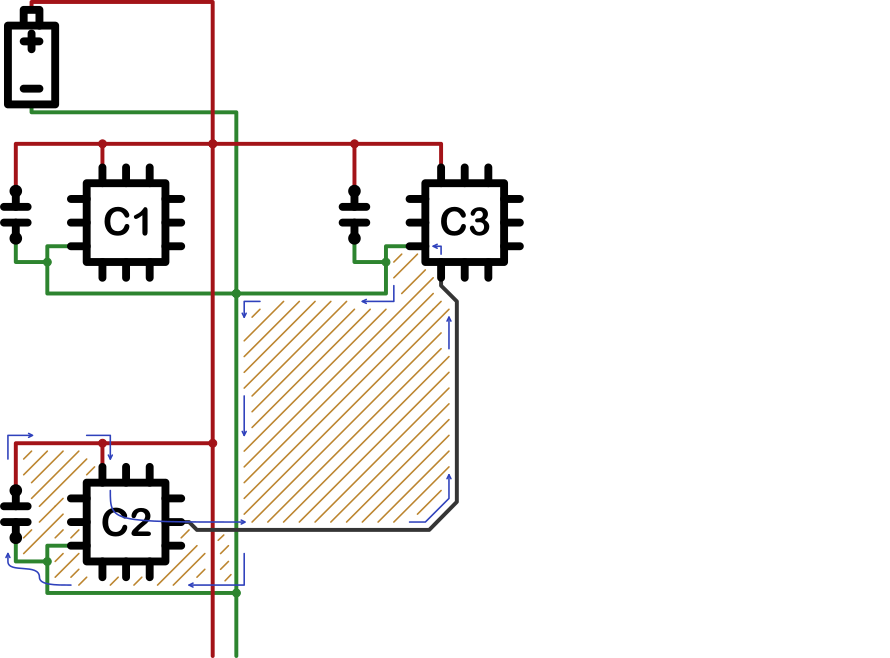 Trying to be smart, I come up with the following solution. Let's add a return path for the signal: 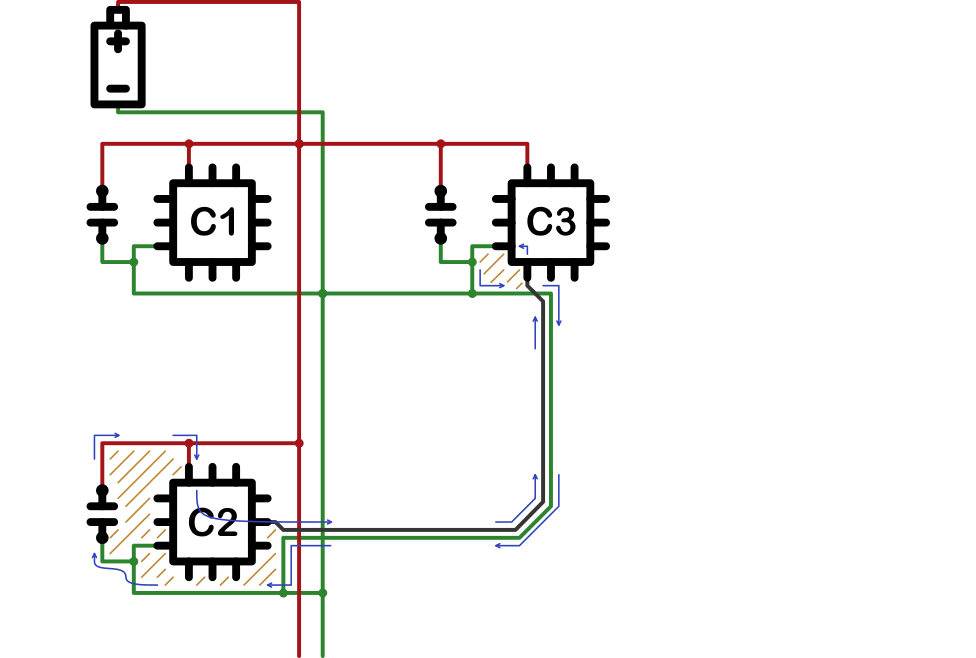 Huray, it looks like the signal is very well protected now. The enclosed surface is much smaller. It won't emit magnetic fields, nor absorb them.

But wait a minute… do you see that? Do you see the ground loop I just created? Look again: 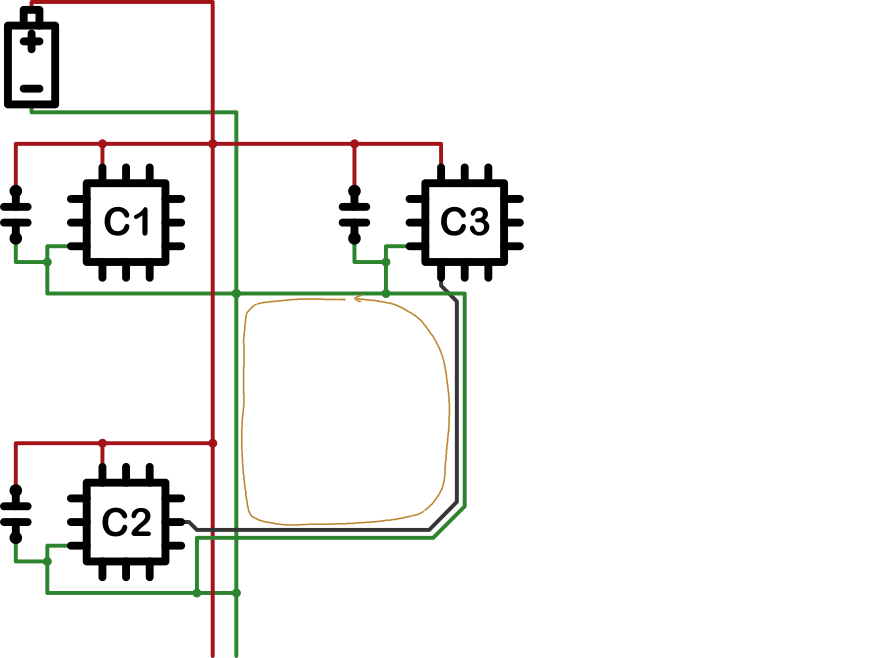 Yikes! What now? Did I just improve the situation, or did I actually make it worse?

The first one uses a star grounding scheme, which works well in some circumstances: low frequencies, absence of incoming EMI/RFI... which means it is an increasingly less useful scheme in today's world...

However, before talking about the loop, I'd like to point out that your design is single-supply, thus chips draw supply current and dumps it into the ground. Using long traces for GND in this case means this current will create a voltage against the GND impedance. Since GND is used as a voltage reference, your chips will have different reference potentials.

If these are single-supply opamps, they will process this as signal. If they are logic chips, ground bounce can corrupt logic levels.

In both cases a low ground impedance is beneficial, ie. ground plane. Without a ground plane you can route horizontally on toplayer, vertically on bottom layer, and create a grid of supply/ground, which was popular back in the days of huge boards packed full of TTL chips.

Note that if your chips are +/-15V opamps, then current flows into the supplies, but they are not connected to ground (except via decoupling caps) so in this case the varying supply current will only introduce extra noise on GND if the decoupling caps are badly placed/routed.

Now, back to your question:

There is no proper solution to this. Back in the day of single-sided analog boards (think a VCR or a tape deck), they were usually placed inside a metallic enclosure which acted as a shield, and there were no cellphones. Today's hifi stuff (for example) will usually have some shielding, if the faceplate is plastic, then you can expect a bit of conductive spray paint to shield against incoming EMI.

Anyway. If the signals are fast, then they need to be routed close to the ground return current path, or else a loop antenna is formed, which will both transmit and receive, also the extra inductance will corrupt the signal itself.

Thus, if these are logic chips, the last layout in your post would be preferable. In fact, the "ground loop" would be one cell in an oldskool "grid ground/supply" board.

Note that the ground loop is a shorted turn, so incoming RF would have to be pretty strong to induce a high enough voltage into it to corrupt logic levels. The main problem would be that it would have a resonant frequency somewhere in the spectrum...

Now, specifically about audio grounding, I can only recommend this article from Bruno "The Man" Putzeys. Also valid for other analog applications. It is also a fun read.

Electronic – How to avoid a ground loop between pcbs

It seems the important point was making the analog signal between the boards differfential. If the boards are close enough to each other, which it seems they are, then a star ground as you have should be good.

The danger with a ground loop is that you don't know what path the power return currents of a noisy board will take. You want them going directly back to the power supply via the same connection that the power comes in, but they could flow back thru the other board. That could cause offsets in the other board, which could get onto the signal.

I think your non-looped ground and differential analog signal were both correct choices. Just because it may work with a ground loop doesn't make what you did a bad idea.

Electronic – Tying ground planes together with a non-zero Resistor

It could be that a shorted resistor would be equally good as a 3R9 resistor or it may not. There are a few things to consider. Firstly, does the analogue circuit make an external ground connection. If it does and so does the digital side then putting a resistor in to bridge the two planes makes sense because digital currents in the digital plane will be less inclined to take the more arduous route thru the analogue plane. This reduces the likelihood of analogue noise pick up due to digital current: - 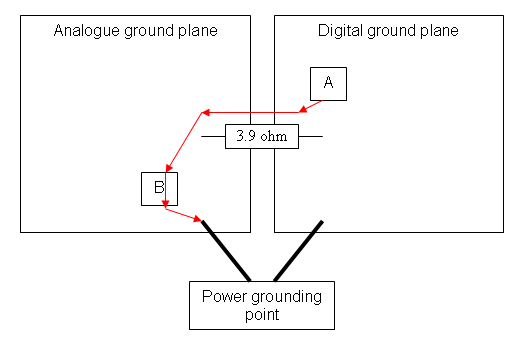 If the 3.9 ohm resistor were shorted out there will be a possibility of some digital current from [A] passing onto the analogue ground plane and passing through a sensitive area [B] before returning to the correct grounding point. With a 3R9 present, the digital current will be reduced because it will be more inclined to take the "easier" route to the power grounding point. Because also the resistor is leaded, it will have a significant inductance that might help this. Consider also that the 3R9 resistor may actually be an inductor and that the OP has misread what it is. Easy to do on some inductors.

There could be other reasons but I'm less inclined to speculate because I could be incorrect. Maybe supply pictures and a schematic.