I'm trying to design an push-pull amplifier for a 4 ohm load, it works with a 48 V source.

This is the latest design I did: 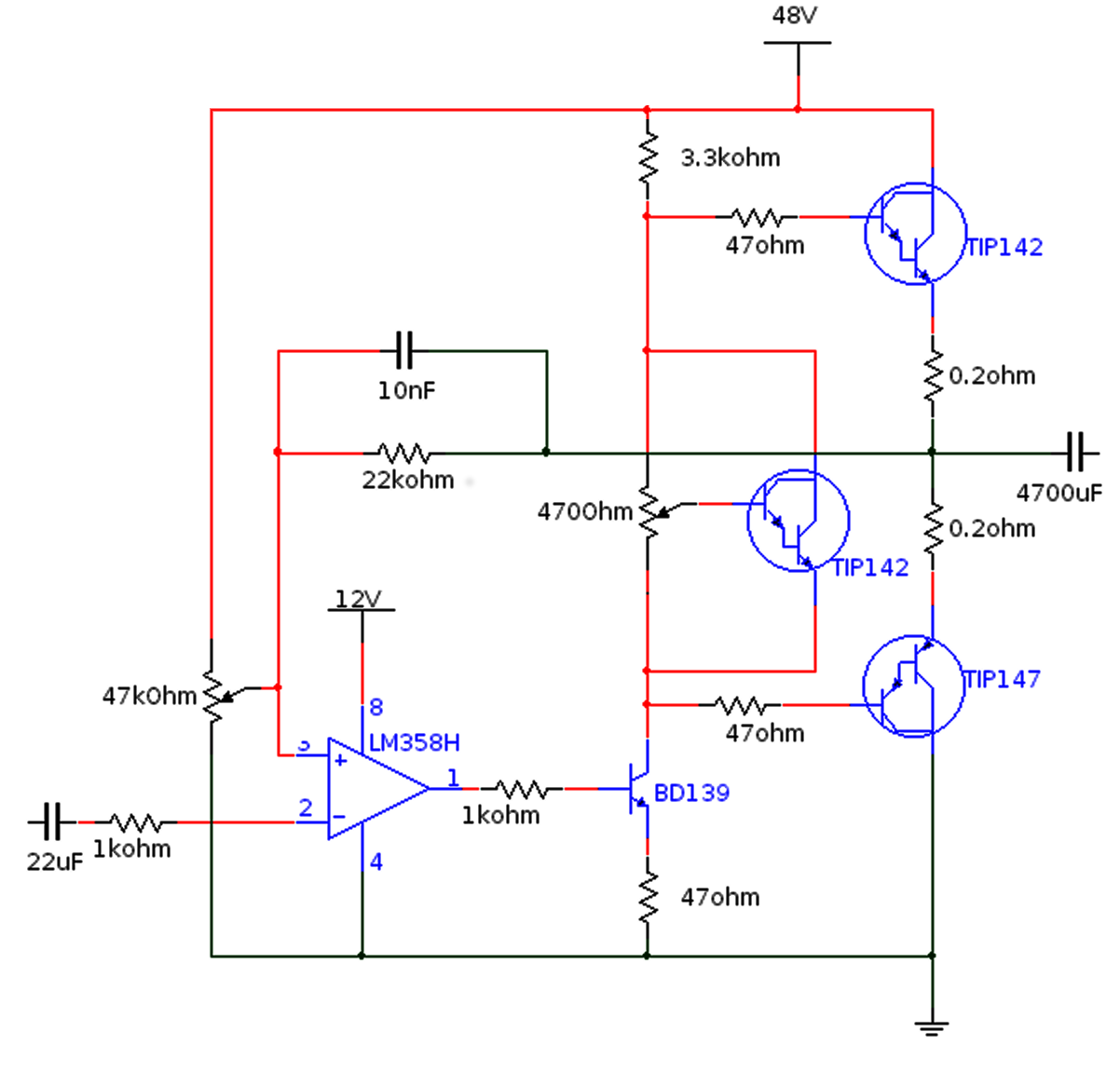 In order to have less crossover distortion, I always end up having voltages in the order of 0.6V constantly applied to the emitter resistors (In pratice, because in the simulations everything always goes easier).

The problem is: Once my load is 4 ohms, I can't put any greater emitter resistors, or it'll have too much lossess. But with two 0.2 ohm resistors, it ends up having a quiescent current of 1~1.5 A, which is very great.

I'm not even sure if, in this way, the emitter resistances will be able to prevent thermal runaway, because they'll heat up fast.

The transistor on that VBE multiplier will be installed between the other two in the heatsink, but I don't know how fast it will runaway.

Being that there are plenty Class AB power amplifiers that work with such loads and voltage ranges and they don't have a quiescent current like that.

That looks like a good design, but I see two issues. One is that the typical idle current for an audio amplifier is 50 mA from emitter to emitter. Once they warm up you adjust the bias resistor again to get it back to a stable 50 mA. That is enough idle current to have low distortion, less than .01%. By the way that would be 50 mA per each pair of output transistors, so you can imagine the idle current of a 1,500 watt amplifier with ten output pairs.

The output emitter resistors vary from .15 ohm to .47 ohm, with .33 being a common value. 0.33 ohms creates a .65 volt drop at 2 amps of current, enough to trip NPN and PNP current limiters. They may cause clipping at high volume, but they will protect the output transistors from excessive currents.

Look at any op-amp design (LM324) and you will see those current limiters in place and insert yours accordingly. 0.33 ohms limits it to 2 amps or about 70 watts RMS. 0.15 ohms doubles the current to 4 amps. Put two .15 ohms in parallel if you really think this can handle ten amps. Do not exceed 50% of the transistors max amp rating.

The second problem I see is that there is a possibility of over-voltage at the IC (+) input pin. It is powered by 12 volts, yet if that 47 K potentiometer is set to high it will put more than 12 volts into the IC, which would destroy it. You CANNOT have an input with a voltage higher than the power pin, or more negative than ground.

Anything is possible, but you need to heat sink those transistors with a beefy heat sink and maybe a cooling fan if your going to push things. The .65 volt drop is for add-on generic NPN (2N3904) and PNP (2N3906) transistors, which short the base of your output transistors to the common output line. Also 10 nF may be a bit high for a feed back loop. They are usually 22 pF or so.

Try and see if the 47 K pot can be tied to the 12 volt rail, thus avoiding a chance of blowing the IC.

There is a bit of redundancy in your design - both Q1 and Q2 do exactly the same thing - you can get rid of one of them and have R3 and R6 connected to the same point such as the collector of Q1.

The other main problem is that the largest peak-to-peak voltage you'd be able to get on the output is about 1.5 volts because the output transistors are wired as emitter followers in push-pull - to make either transistor conduct, folk tend to use the 0.7 V base-emitter rule - i.e. the base needs to be 0.7 volts greater than the emitter (NPN) and 0.7 volts less than the emitter (PNP).

Given the speaker is 8 ohms and the biggest sinewave from the amp (on a 3V3 supply) is 0.53 volts RMS, the power into the speaker is 35 mW (before things start to clip/distort).

I'd throw it away and get a chip that does this sort of thing - even a H bridge amplifier suitable for motors is going to be better and you'll get a lot more power.

I am not really an audio guy. But I took a look at Douglas Self's "Audio Power Amplifier Design Handbook." Those values, of 55 to 59 mV are ballpark. You might want to warm up the amp (by playing some music) and then check it again when it is warm.

As far as the mismatch goes, it isn't a huge mismatch. But were you measuring it with a load attached or no load? With no load, the two resistors are perfectly in series (or so I assume), so the currents have to be the same. In that case, any voltage mismatch is due to Re mismatch. You can tune Re by adding resistors in parallel with whichever one is higher in voltage until the two voltages match each other. Again, do this with no load attached to the amplifier.

If the two Re's are already matched, but you have different voltages across them when a load is attached, that is due to an output voltage offset. Unless it is large, I wouldn't worry about it.

Ultimately, bias current should be set based on what produces minimum distortion, not on anything else. But it is not very practical for most people to measure distortion while tuning bias current.