If a transformer's primary and secondary are connected in series, then the total inductance of the result, is greater than the summation of each coil separately. 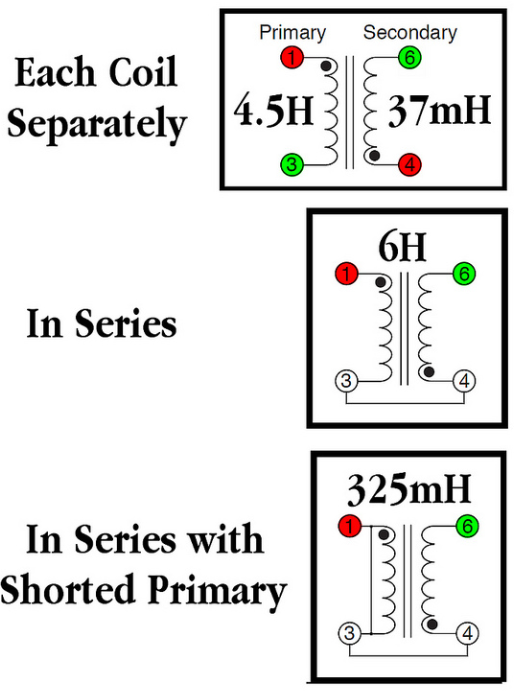 I've seen the math for this and understand it well enough; but the thing is, if I connect an xfmrs coils in series and then short the primary (so that there is a direct path to the secondary) the result is significantly greater than the inductance of the secondary by itself: this I don't understand.

I understand that the short is not zero (unless one is using a super conductor), and that there is going to be current through the primary, but there seems to be more to it. For instance, if I short the secondary (instead of the primary), the LCR meter reads MUCH higher than as if the coils were just connected in series!

I want to make sure that my LCR meter is correct, because if this phenomenon holds true, then I would like to take advantage of this in a filter circuit.

Can someone help me to understand what's going on?

Shorting one winding and measuring the other gives you the leakage inductance, which is a result of imperfect coupling between the two windings, and is a function of the physical construction of the transformer.

Depending on your needs, it can have a practical application - zero voltage switching full-bridge converters often use the leakage inductance of the transformer to assist with the ZVS transitioning of the primary MOSFETs - but in general, transformers are designed to minimize this parameter by a variety of means (winding interleaving, etc.)

Electronic – How to use a transformer as an inductor

How do I obtain an inductor from the given transformer in the image? ... So that the inductance of the resulting inductor must be maximum.

Note that IF the windings were NOT magnetically linked (eg were on two separate cores) then the two inductances simply add and Lsepsum = Ls + Lp.

What will be the frequency behavior of the resulting inductor? Will it have a good performance at frequencies other than the original transformer was rated to run in.

"Frequency behavior" of the final inductor is not a meaningful term without further explanation of what is meant by the question and depends on how the inductor is to be used.
Note that "frequency behavior" is a good term as it can mean more than the normal term "frequency response" in this case.
For example, applying mains voltage to a primary and secondary in series, where the primary is rated for mains voltage use in normal operation will have various implications depending on how the inductor is to be used.Impedance is higher so magnetising current is lower so core is less heavily saturated. Implications then depend on application - so interesting. Will need discussing.

Connecting the two windings together so that their magnetic fields support each other will give you the maximum inductance.

When this is done

so the resultant inductance will be greater than the linear sum of the two inductances.

The requirement to get the inductances to add where there 2 or more windings is that the current flows into (or out of) all dotted winding ends at the same time.

k can be set to 1 for this purpose as we have no exact values for L.

The inductance of the two windings in series is the square of the sum of the square roots of their individual inductances.

Lm is not relevant to this calculation as a separate value - it is part of the above workings and is the effective gain from crosslinking the two magnetic fields.

[[Unlike Ghost Busters - In this case you are allowed to cross the beams.]].

Apparently, there is only one "leakage inductance" at one side in the figure above.

No, that is incorrect.

Every winding in a transformer does not couple 100% to each other winding and that is a fact. If some piece of text suggests that the leakage inductance is only attributable to one winding then that piece of text is at best misleading and, at worst blatantly wrong.

However, from the perspective of someone wishing to know how well two windings may couple then a single entity of leakage (a composite of both leakages) can be used to express that.

As for your 2nd question, you CANNOT short the secondary at the point you wish. This IS impossible - you can't take the equivalent circuit of the transformer and hack at it like that. The leakage measured is the composite leakage and this can be broken down into two components by using the turns ratio squared but even that is only an approximation; the magnetization inductance will alter the accuracy of this method slightly but, for all practical purposes, this method yields fairly accurate results.