I am working on an audio amplifier but got stuck on to a basic of npn transistor circuit.

Attaching a class-A amplifier circuit. Take a look here or here. I tried to simulate the circuit but as everywhere on net it is said that this can amplify whole sine wave , in my P Spice simulation it is not. Only one half of input signal is getting amplified.

My question is how I can get full sine wave (as all the schematic of class a amplifier over the internet claims)? Also please explain why exactly I am getting attached waveform in my circuit. 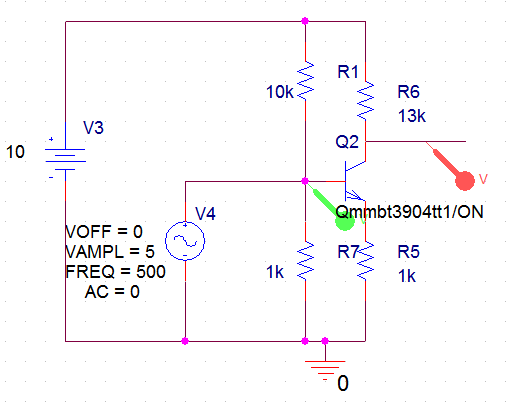 The 10 K and 1 K resistors you have connected to the base of the transistor are for biasing, however, the voltage source you have for the oscillator is preventing that from happening. If you AC couple the oscillator instead (add a capacitor between the signal generator and transistor) you should see correct operation. With the voltages you have you will see distortion (clipping), try reducing the oscillator to 1 V.

You can experiment with the ratio of the biasing resistors to how that influences the output waveform.

Electrical – LM386 no output with input signal below 2V

With the addition of "R17" (C17) before the digital pot, the voltages present on pin 5 of the pot, for any typical input signal, will settle to an average of zero volts since capacitors block DC. So the AC signal being fed into the pot, if it were 0-3.3v from a microcontroller, is now -1.65 to +1.65v, which

To quote the MCP4131 Datasheet,

So you are placing as low as -1.65v on a wiper pin with these maximums as defined in the datasheet:

Try it without C17 and it will likely work. If it still misbehaves, then keep C17, but bias pin 5 (add a resistor divider to it from +3V3 to Vss) to around +1.65v or slightly over. Doing so should prevent the signal from going negative into the pot.

Electrical – How to design the A-B amplifier? I mean I have understood the working but how do i choose the values

You've said the following that I can understand, regarding the design:

You've said the following that I cannot understand, regarding the design:

I don't understand much of this. See above.

By designing it, first.

Outputs often increase when they have access to increased voltage rail magnitudes.

In practice, it's a matter of compromise.

Lots of options. One is to use diode connected BJTs. Another is diodes. In either case, you may also want to add a resistor. You could also use a VBE multiplier, with or without Early Effect compensation. In most cases where more power is involved, you may want to thermally couple them. In this case, it perhaps matters not so much.

Not sure what you are noticing, even with the new diagram.

Not sure that curve is present, either.

Are you prepared for the paltry output that using these BJTs would normally imply?

(Also, as a side question that will rise up later on, how do you expect to handle the stereo output from your mobile? Will you select just one side or the other or do you require summing of the two channels into one?)