It's a "linear/rotary optical encoder," or, "incremental encoder," like this one, which costs about \$6:

You use it with "optical encoder strips," or "codestrips," like this one, which costs about \$.30:

It uses a single LED with 2 photodetectors. These are exposed as pins labeled Channel A and Channel B. The pins will output either 0 or Vcc V, which is 5V in my case. Since there are 4 distinct states for A and B, you get 4 times the resolution of your codestrip. Since it can handle up to 150 lines per inch on a codestrip, you get 1 600th of an inch resolution. When monitoring the A and B channels, you can determine which direction you are moving by comparing your current state to your last state. For example if A and B are both high, and then A goes low, you've moved up 1 600th of an inch.

It is a great, accurate, affordable system for determining precise linear position. 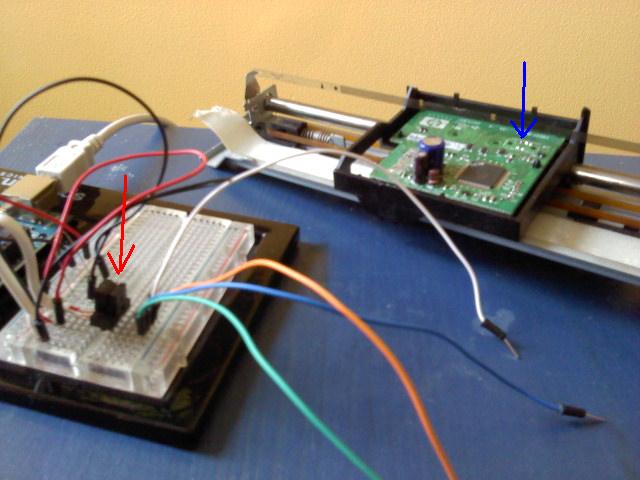 The red arrow points to the ir emitter / detector. The blue arrow points to where I got it. The printed circuit board under the blue arrow would slide back and forth under that gray band, which is transparent plastic with lots and lots of very skinny black lines. That was probably how the inkjet printer kept track of the position of the print head.

The 2 ir diode pins were easy enough to figure out. That's being powered by the fat white wire on the far left. I can't figure out the additional 4 pins on the detector part though. Notice, that's a total of 6 pins. I pulled the cover off the part to get a closer look, and those pins look like this, with the skinny white wire attached to the pin on the far right: 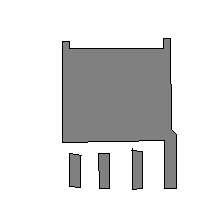 The black cover on the ir e/d has tiny white letters:

I tried Googling around for datasheets, but I didn't manage to find anything. I tried calling Agilent but just got lost in the phone tree, and they hung up on me at some point, haha.

Does anybody have a datasheet for this or a similar component, or have any idea how this 4 pin detector works, or know where to look for a datasheet or who to call, or know a component I could substitute, or anything really?

To be clear, there are 6 pins total. 2 for the diode, and 4 for the detector. I don't understand what all 4 pins on just the detector are for.

I found a very promising blog post about this kind of problem. http://benkrasnow.blogspot.com/2010/02/linear-position-tracking-with.html

Here's a 6 pin linear optical encoder with data sheet which I found from this blog post.

I believe your part is a dual channel IR position sensor. I can't find your exact part, but I did find a datasheet for something very similar although this has 8 pins, this is the OPB822: 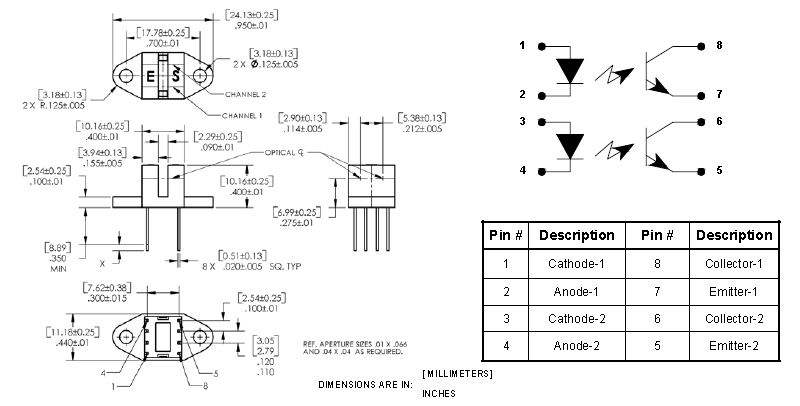 However, yours only has 6 pins. I guess that as you suggest, two pins are the infrared LED, so I think that the two detectors share the same LED.

The other four pins are the opto couplers, and you can identify them using an multimeter that can measure the voltage drop of a diode. Try touching two of the probes to two of the pins while switching the transmitter LED on and off, if the reading changes with the LED, then you've found two of the pins you need.

The dual sensors can then be used to sense which direction its travelling along the strip, and how far.

Electronic – How to make IR proximity detector immune to the daylight

I don't think that using the signal of an LDR can do much because the circuit already has some kind of ambient light suppression: it's the high pass filter at capacitor C8.

I agree with MikeJ-UK that the signal probably is saturated by ambient light.

If you just want to get the proximity sensor working with more ambient light I'd suggest to put an IR filter in front of the detector.

If this is too easy (or you also have a lot of ambient IR light, e.g. because the sun is shining at the detector):
You have to solve the problem of the signal being totally jammed by the ambient light.

Lets suppose the photocurrent caused by the signal is some micro amps or less and the ambient light gives you already some 0.1mA there is only a very very small signal voltage at the input voltage divider (D1/R10). The more current (caused by ambient light) is flowing in the voltage divider, the smaller your singal will be.

Just increasing the amplification doesn't help, because the noise will be amplified too and I think you come into regions where signal-to-noise ratio is what you have to take care about.

So instead of having a voltage divider at the detector a better approach would be to utilize a transimpedance amplifier:

Its output voltage is linear to the photo current. So this will give you at least constant signal level, no matter how much ambient light you have (see also this article about this problem by Bob Pease).

Of course this is only true within limits: if your amplifier is jammed, you can't do much.

R5 will definitely need to increase to keep the LED (D2) from having too much current. You can probably make this a 680ohm. The QSE113 photodiode will still largely produce the same current into the base of Q1 for the same light so no change envisaged at this point. I think I'd be tempted to add a resistor from Q2 base up to the positive supply rail - make it a 10k but be prepared to increase it should sensitivity be a little too low.

I don't particularly favour where R6 is at the moment - instead of it going to the positive rail, try conecting that leg to Vcc on the 555 and checking things still work OK at 5V, then it should be OK at 12V. Where it was connected and with Q2 switched off (Dark) the 555 would be unpowered except for the R6 connection and this might do some damage in the long run.

Make sure you have a 555 that is suitable for 12V and you should be OK.