Inspired by the idea to minimize the return path, I am thinking about the two possible improvements of the design, how to connect the signal source to consumer. In short, there are lots of high frequency lines going from the source to consumer and then sharing the return path into the ground. I have produced a separate example because my original circuit is too complex. Let's assume we need the following connectivity: 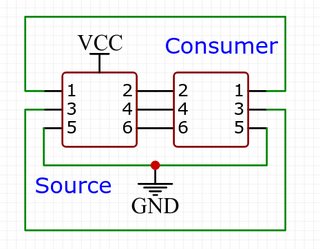 The source that is an IC chip puts the VCC voltage in pulses at high frequency into consumer. The consumer that is the LED array passes the current through into the ground. I assume, the ground should be the return path for the signals.

Seeking to minimize the length of the loop, the two ideas come to mind:

Which of these designs (left, middle, right) would provide the least inference?

lots of high frequency lines going from the source to consumer

Before considering EMI, think about signal integrity. For example the 0.1" headers pictured only have one GND pin which serves both as current return and reference for all signals. This means return current from each signal will create a noise voltage across the GND pin's impedance. Since GND is used as reference for the other signals, this noise voltage also influences the other signals. This is called common impedance coupling. You'll also have some capacitive and inductive coupling between signals on adjacent pins.

If your signals have high noise margin (for example CMOS logic levels) and moderate slew rate (say, arduino-level MCU) this is not very important. But faster signals will require more ground pins.

Another issue with little modules on headers is that the module stands off from the PCB, so if its ground is at a different potential from the PCB the two will act as a dipole antenna and radiate. This is especially true if the module is connected to a cable, which being physically much longer than the module will act as a much better antenna. Ideally you'd want all your cable GNDs and shields to be tied together via a low impedance (ground plane or metal chassis back plate) at the point they enter your enclosure, to avoid inducing HF potential difference between your cables.

Now back to your pcb screenshot...

Left: this has highest loop surface area for all signals and their return, so highest inductance, highest EMI, and the ground trace has much higher impedance than a plane so higher common impedance coupling between signals.

Middle: the return current will follow the path of least impedance, which means under corresponding traces at HF (lowest inductance) and straight line at low frequency. I've drawn the HF path in yellow, note it goes through the GND pin that are closest to the signal, and since there's only one the signals on the right will have extra return path length.

If the ground plane is interrupted by something (blue blob) then the current will go around it and you have a slot antenna.

On the right, the top right green traces (outlined) are useless since no current flows in them. Besides that the result would probably be between the two previous cases. A ground plane is a lot more convenient than traces though. But keep in mind the drawing on the right, and if you want to put components that make holes in your ground plane, you can put them in the black spaces.

I think you're on the right path, a couple of notes,

1) With a signal trace between two planes, the return current will split between the two planes, even if one of the planes is split. The return current cannot "see the future" and decide ahead of time which plane to return on. It will return above and below the trace until it sees the split at which point is says "oh crap!" and pays you back by possibly causing you to fail FCC testing. So you want to avoid running traces over plane splits even if another adjacent plane is not split. You can deal with splits with capacitors and such but this type of solution is less than ideal. I'd focus on always avoiding running a trace over a plane split on an adjacent plane.

3) You asked about two signal layers sharing the same plane. Usually, this is not a big deal if done properly. What many people do is use one of the layers as a "horizontal" signal layer and the other as a "vertical" signal layer so the return currents are orthogonal to each other. It is very common to route two signal layers for each plane, and use this horizontal/vertical technique. The most important thing to remember is to not change reference planes. Your setup could be a little tricky because going from the bottom layer to the 4th layer adds another return plane. More typical 6 layer boards are

If you need smaller additional planes, like under the micro, these would usually be placed as an island on one of the signal layers. If you need to use more power planes, you might want to think about going to 10+ layers.

4) Plane spacing is important, and can have huge impact on performance, so you should specify this to the board house. If you take the example 6 layer stackup I mentioned above, spacing of .005 .005 .040 .005 .005 (instead of standard stackup with equal distance between layers) can make an order of magnitude improvement. It keeps the signal layers close to their reference plane (smaller loops).

But (this is my doubt) in this configuration is necessary a capacitor (VCC to GND) near the signal via, in order to provide an adjacent return path for the current.

Not only do these capacitors take up space and cost money, but also, they force your return current to take a longer path than it would have to if it could just transition from one side of a copper plane to the other, so they introduce some EMI risk.

[With stackup B] I have only one buried capacitor

I wouldn't worry too much about trying to make buried capacitance. Answering a recent question I worked out roughly the value of capacitance you can build in to a board. You have a multilayer board, so you can have much smaller plane-plane distance than the guy who asked that question, but you also have only 4 x 4" of total area to work with ... I don't think you'll achieve more than a few nF of total capacitance with that arrangement. Of course it will be very high quality capacitance, effective to very high frequencies, but realistically a factor of 2 difference in the capacitance value isn't going to make or break your design.

[Also, for stackup B] I fear that the signals are poorly shielded.

In either stackup your signal1 and signal4 traces aren't well shielded, and your signal2 and signal3 traces are fully enclosed by ground planes. I feel these two situations are essentially equal.

In a comment to another answer, you also mention,

This means you'll likely need or want to break up your VCC "planes" between nets, and so there will be slots in those plane layers. That makes them much harder to use for return paths, as you do for signal1 and signal3 traces in stackup A.

Overall, I'd recommend stackup B.