Closed. This question needs details or clarity. It is not currently accepting answers.

Want to improve this question? Add details and clarify the problem by editing this post.

Suppose a signal is constructed using two independent signals(say S1 and S2)both S1 and S2 have two different individual frequencies.The resultant signal that has been constructed has a new frequency,which is the LCM of the two frequencies of the signals S1 and S2 .Logically how can we justify and explain the above method.
Also there is a video tutorial on YouTube where I have seen this.Refer to it for any reference.
Here is the Video– 1. Understanding Fourier Series, Theory + Derivation.

He added a low frequency with a high frequency– 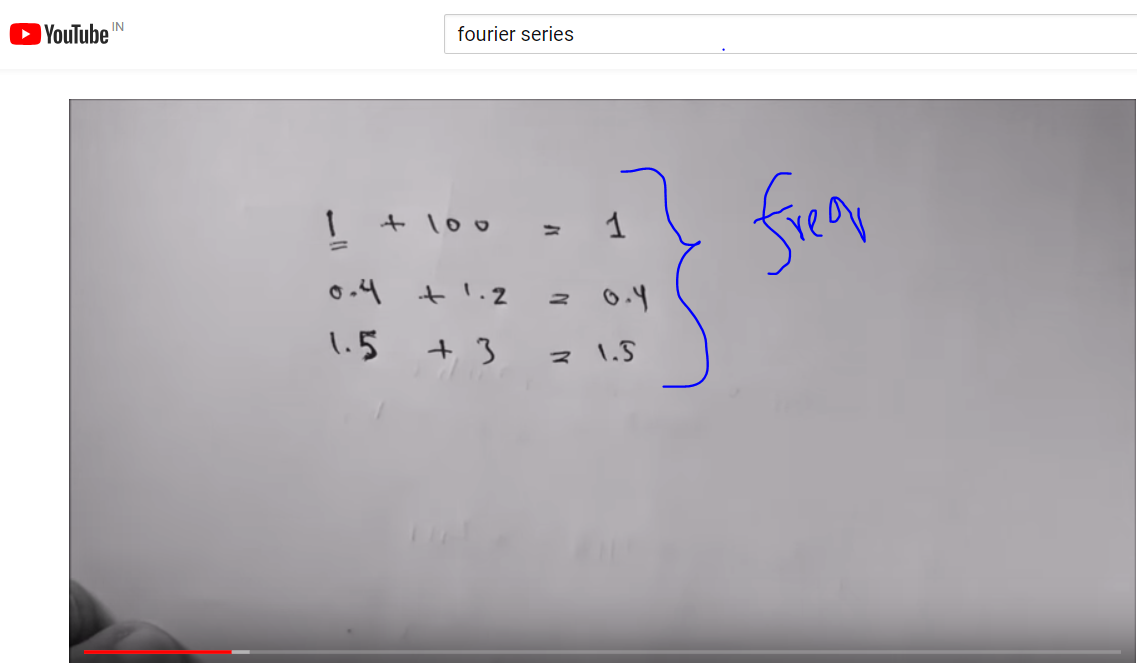 This is just basic math.

It may be easier to think of this by considering the period rather than the frequency. If you have a signal with 1 second period and add to it a signal with ½ second period, for example, with what period will the combined signal repeat. The answer is obviously 1 second. Another way to look at this is that the ½ second signal is a harmonic of the 1 second signal. Adding harmonics doesn't change the fundamental frequency.

For the harmonic addition logic to be valid, added signals have to actually be harmonics. That means their frequencies must be integer multiples of the fundamental. Therefore, the problem is finding the fundamental of a set of frequencies. The fundamental is the highest frequency that all the others are integer multiples of. What you are looking for is therefore the largest common denominator. Note that this largest common denominator of the frequency results in the same answer as the least common multiple of the period, which is what you seem to be asking about.

What you are asking about falls into the realm of spectral estimation, of which frequency estimation is a particular case.

These limitations apply whether you have an input that is formed by combining two independent sources or if you just have a single, pure, sinewave input and you want to estimate its frequency. Of course the second limit has some relevance if you have two inputs at closely spaced frequencies and you want to be able to separate them.

You may also be able to get some help with this at dsp.stackexchange.com, though the typical answer over there requires a substantial amount of mathematical background that may make them difficult to understand.

Is a multiplexed signal same as a composite signal

It seems like your question is about data transmission, so I'll try to answer it in this context.

You can't transmit information on a single frequency, because technically "single frequency" implies that the sender is turned on forever. As soon as it is switched on/off (corner case of AM) additional frequencies are added. For example a 1 MHz carrier switched on/off (this is called on/off keying or OOK) at 1kHz causes two sharp spikes at 0.999 MHz and 1.001 MHz in the spectrum. The difference between the highest and the lowest frequency is usually called the bandwidth of your signal and in the case of OOK it is twice the modulation frequency. The max. data rate would be 2 kBit/s, because the highest frequency sequence that is possible is 1010101....

If you want to composite such transmission systems onto a shared medium (cable, air) you need to make sure that they don't overlap. in the above example you could place additional transmitters at .998 MHz, 1.002 MHz etc. A practical example is FM radio, the stations are separated by a couple of 100 kHz for this reason.

At this point, I recommend you to learn more about Fourier Transformation and Shannon Coding Theorem, it will help you to get the connection between time and frequency domain in a data transmission system.