I designed the following zero crossing detector using an FOD819S optocoupler (U5): 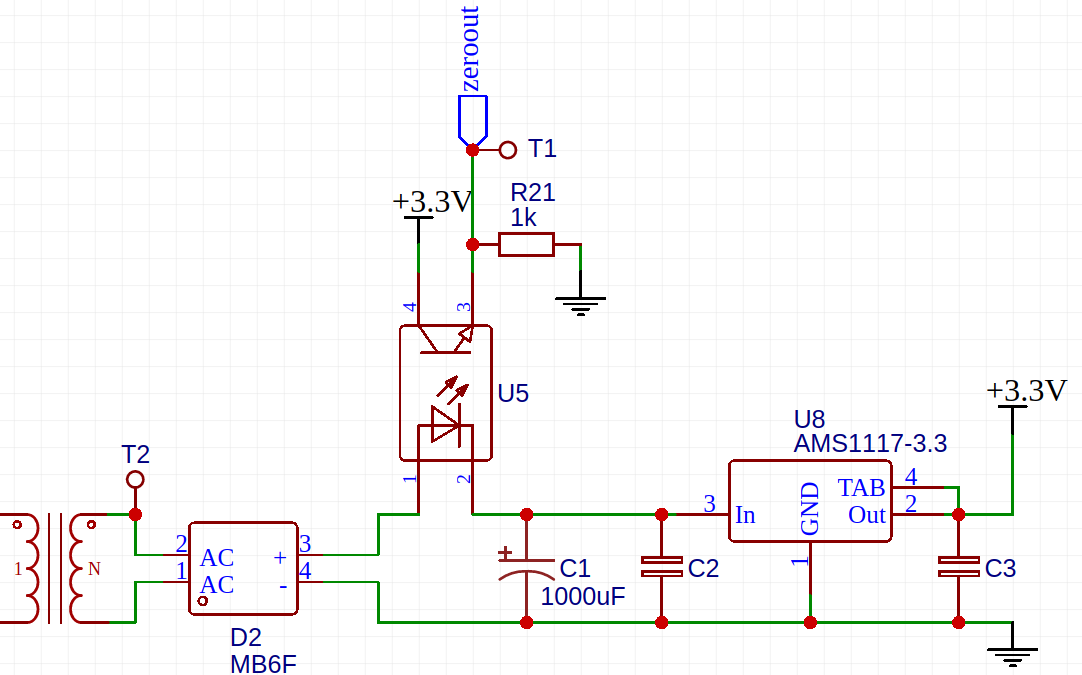 The source of the optocoupler is connected to a MB6F full-bridge rectifier (D2) which is supplied by a 9V transformer connected to 220V AC/50Hz. The 3.3V regulator (U8) supplies power to an ESP32 microcontroller and a segment display (not shown in schematic).

I probed the circuit in T1 (in blue, relative to GND) and it works as expected most of the time. For reference, I connected another probe to T2 (in yellow) before the full-bridge rectifier. 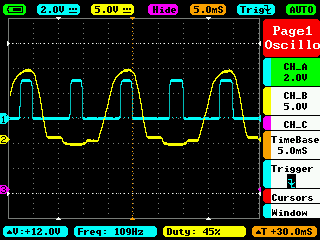 However, when cutting and re-applying AC to the transformer, it sometimes shows some odd behavior: 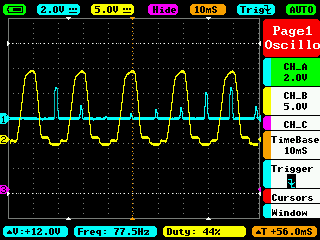 Or it simply stays at 0V: 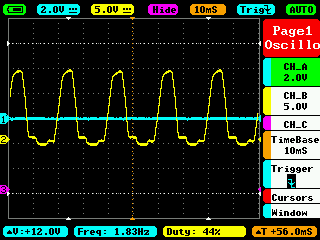 Another issue is that the detected frequency is ~10% above 100Hz (not stable) which is also what I detect from a microcontroller using an interrupt on falling edge. It might be a consequence of the slow rise time.

What is wrong with this circuit? Should I add a constant load before the regulator?

Here is the signal when using the first circuit from Dave Tweed (with a pull-down resistor): 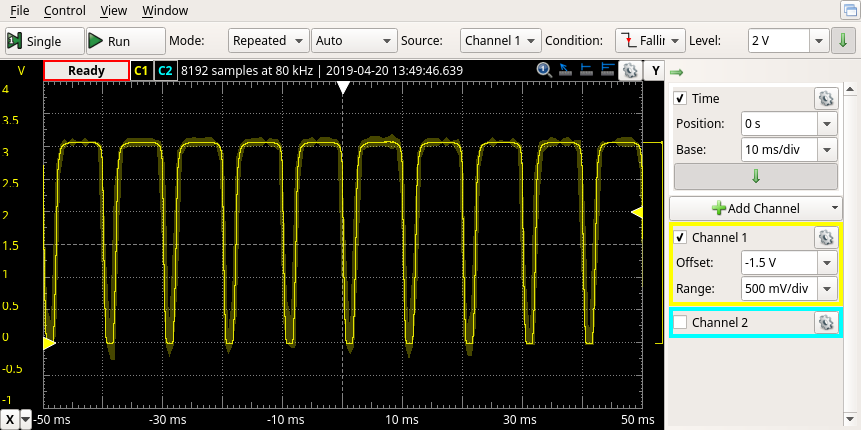 If you want to monitor the output of the bridge rectifier, put your optoisolator in parallel with the power supply, not in series with it. Note that this requires an extra blocking diode (D6) in order to prevent the power supply input capacitor from driving the optoisolator LED.

Better still, put the optoisolator upstream of the bridge rectifier. Then every rising and falling edge at its output represents a zero crossing of the AC voltage.

How can I know when the TRIAC turns off?

When the triac is on, the voltage across the triac is clamped to a voltage near zero. (The data sheet for your triac might say something like worst-case V_A1_A2_on is +- 1.5 V).

Many circuits detect when the voltage (positive or negative) across the triac is above roughly +10 V or below roughly -10 V, to indicate that the triac is definitely off. See Figure 4 of AN307.

When should I fire the TRIAC's gate to obtain an arbitrary motor speed (let's say half the normal speed)?

For a few loads, the speed is roughly proportional to the triac on-time. For these loads, turn on the triac 1/2 the time (turn the triac off 1/2 the time) to get a speed close to half the maximum speed.

More often the load increases as the square of the speed (for example, when pushing a vehicle through the air). For these loads, turn on the triac 1/4 the time (turn the triac off 3/4 the time) to get a speed close to half the maximum speed.

Nearly always there is some minimum on-time (maximum off-time) just to get things moving; anything less than that and some electric power goes in, but nothing moves.

As Olin Lathrop mentions, it is often adequate to experimentally measure the output speed vs. triac on-time a few times (perhaps for 1/5, 2/5, 3/5, 4/5, of the full on-time or full off-time), figure out which setting gives close to half-speed, and hope it stays approximately the same when you run open-loop.

If precisely maintaining some particular speed is important, you may want to run closed-loop -- in other words, add some sort of tachometer to measure the actual speed at all times, and close the loop by adding something to automatically increase the on-time (decrease the off-time) when the measured speed is too low, etc.

When should I fire the TRIAC's gate when controlling an inductive load?

Please consider doing things in the way recommended by the data sheets and app notes provided by the manufacturer, in this case ST application note AN307: "Use of triacs on inductive loads".

Perhaps the simplest approach is

How to drive an IGBT with an optocoupler

There are many possible schematics. IGBTs are best driven with high voltage high-pulsed-current-drive 15V/-5V drive and of course you want isolation or you wouldn't be asking for an opto. You may be able to get away with +15/0V drive in some circumstances.

Here is one chip that will do the opto part and the driver part, and is similar to the one you are wanting to use. You still have to deal with giving it +15/-5 or at least +15V/0 relative to the emitter on the high side driver.

Probably for such a low power level a bootstrap diode would be an appropriate approach (limited to +V drive only). So, something like a UF4007 connected to a low voltage supply on the mains side. Ask if you don't know what a bootstrap is, or see most any of the IR application notes on half-bridge drivers.

The LED drive circuit most recommended is the shunt circuit (have your micro drive a transistor to shunt the LED, with a series resistor or resistors to the supplies).