I am trying to learn how to implement negative feedback to a common-emitter configuration.The goal is to reduce distortion by sacrificing some of the gain. 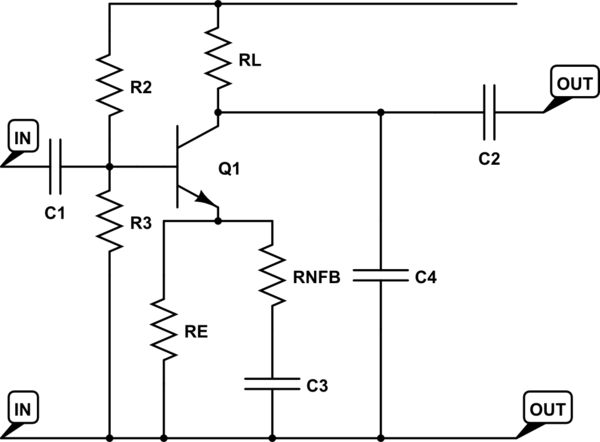 This is how the complete circuit should look.

I am talking about \$R_{NFB}\$ (I have not inserted it yet).This site specifies that after having everything calculated(excluding \$R_{NFB}\$ and \$C_4\$),its value should be calculated in order to preserve the initial gain.The formula to be used for this gain is now \$\frac{R_L}{R_{NFB}}=GAIN\$ at high frequencies.After getting its value,\$R_E\$ must be recalculated so \$R_E\$+\$R_{NFB}\$ is the same as the \$R_E\$ original value.

In other words,I understand that I am supposed to unplug \$R_E\$ and put it in series with \$C_3\$ and call it \$R_{NFB}\$.This doesn't make sense to me.I know that this negative feedback works by allowing a certain part of the AC output signal on the emitter,reducing the shunt effect of the bypass capacitor,but I don't understand the calculations.

It's late here, so I will write a little but will have to add more after I get back up in the AM.... 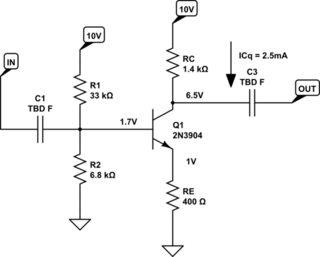 I hope you can figure out where the values came from, given that you accept where I set the voltages and picked out the quiescent collector current.

The reason, again, for \$R_e\$ is because there is, in effect, a tiny, temperature dependent thermal voltage at the tip of the BJT emitter. If you take into account \$I_c\$, then this is converted into a tiny, temperature dependent resistor value often just called 'little-re'. Regardless, you want to overwhelm the thermal variations there with something. Since the value of \$\frac{k\cdot T}{q}\$ is on the order of \$26mV\$, jacking the emitter up to about \$1V\$ makes the thermal voltage tiny by comparison, so when it varies a bit over temperature it doesn't affect the emitter's operating point very much. So that's why it's there.

Ah. You thought perhaps that it was there because of the DC gain I might have wanted? No. It's there to set the DC operating point for thermal stability. Of course, yes. The gain here is terrible. It's \$\frac{1400}{400} \approx 3.5\$. And I can't really change it, either, if I want to keep my thermal stability and keep the transistor well out of saturation, etc.

In short, I'm trapped. No wiggle room, at all. That's not so good.

Luckily, AC comes to the rescue. let's say the new schematic looks like this (I'm still leaving out C4. For these purposes, it's just not necessary and I'll let you worry about it on your own): 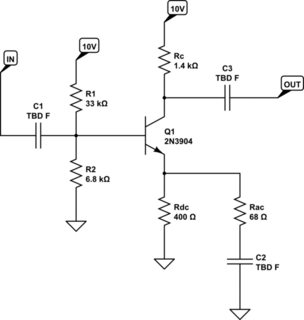 So we get to have our cake and eat it, now.

There are two perspectives shown on your web page:

Either works. The difference is that the left side topology allows you to easily set the AC gain-setting resistor more directly, as the capacitor ends up bypassing the other, DC-setting, resistor. However, this forces you to divide out the DC resistance needed to set the emitter voltage, so that becomes a little more complicated. The right side topology makes setting up the DC resistance for a given emitter voltage and quiescent current trivial. But it makes the AC gain resistor's value a little more complex to work out since you have to treat it in parallel to the DC setting resistor. It's just two different ways of approaching the same thing.

There are also some bootstrapping techniques I hope you also learn about. The simplest uses the fact that the emitter follows the input at a gain of about \$1\$ to actively drive the base's resistor divider node and where the signal directly drives the BJT base, with a new resistor now between the divider node and the BJT base. The capacitor develops an equilibrium voltage across it that is just enough to make up for the difference across it. And since one side of that new resistor is driven by the signal itself and the other side is driven by a low impedance emitter that is following the signal pretty well, the new resistor itself sees the same voltage (DC bias plus AC) on both sides, so almost no current flows. And this very much increases the input impedance. Which is nice. And there are other improvements, as well.

Here's an example of a simple bootstrap: 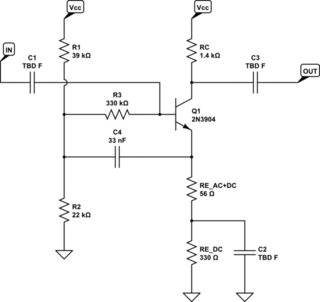 (Take note that I switched over to the other emitter configuration we've discussed here, just to do something different.)

The idea is that the signal directly drives the transistor base through \$C_1\$ and also that signal is on one side of \$R_3\$. \$R_3\$ is a DC path to allow \$C_1\$ to find its equilibrium state voltage and as a DC path for \$Q_1\$'s starting up the required \$V_{be}\$ to put \$Q_1\$ into the active region. \$C_4\$ picks up the low-impedance copy of the signal at the base (so there is some current drive available) and drives that back to the divider node. Now, slight variations in the signal will move \$Q_1\$'s base up and down, and these will be copied across to \$Q_1\$'s emitter, which will then drive those same changes back to the divider node. Assuming that \$C_4\$ has exactly the right voltage across it (given enough time, it will) to exactly match the difference between the quiescent emitter voltage and the quiescent divider node voltage, then all this works fine. The divider node will move up and down, driven by the emitter which is copying the base, and the other side of \$R_3\$ will be also moving up and down roughly in phase, as well. So \$R_3\$, if everything were perfect (and it isn't), would have the exact same voltage across it and would then have no current flowing in it, at all. The reality is that the emitter does have a copy, but at a gain slightly less than \$1\$. And capacitors, even largish ones, will add a slight phase difference. Etc. But it works pretty good just the same. And it greatly reduces the load on the signal source.

And in any case that is only the beginning. Practical amplifier stages can and will take into account a lot more than all this.

For my opinion, it is somewhat confusing to use this term "re" (and your question can serve as a "good" example). This parameter re (called "intrinsic emitter resistance") is nothing else than the inverse of the transconductance re=1/gm. I think, it is not correct to call it "resistance" because it relates the output current and the input voltage (gm=dIc/dVBE). In contrast, the classical resistor definition relates the voltage across and the current through the two-pole element.

This transconductance appears in each gain formula, for example in common emitter configuration:

The value of gm=1/re can be found by differentiating the transfer function Ic=f(Vbe) at the selected quiescent current Ic and can be found as gm=Ic/Vt (Vt=temperature voltage). Hence, it is a parameter which is computed at the DC bias point.

Does this answer your question?

From the gain formula (with emitter resistor RE) we can derive that the gain is reduced by the factor 1/(1+gmRE). From this we can again derive that the term (gmRE) is the loop gain of the feedback system. From feedback theory we know that the disrortions are reduced also by the same factor. Rewriting this factor we get

This prooves the result you have shown.

Your reasoning is correct. As pointed out in the comment, approximations are very useful in reducing the amount of calculations required to determine the performance of a circuit. In general, most transistor circuits are designed to make their performance independent of transistor parameters as much as possible because those parameters are quite variable in practical transistors. In this case, a good approximation, as you already know, is that the value of the emitter resistance is much smaller than the external resistor. This greatly simplifies the calculations. In any case, tolerances on components will probably swamp out the value of the exact calculation.