I am trying to make a time-dependent inductor in LTspice, but it is not as easy as for resistors which allow values directly depending on 'time'. I tried using the characteristic equation of an inductor and a behavioural voltage source in the simplest circuit I could think of as follows, but it does not work (the current reaches 10^37A… How could I achieve this? 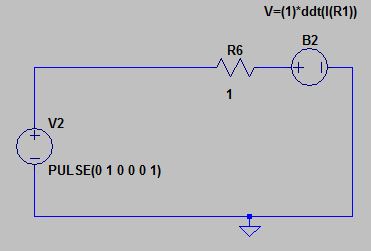 The current through R6 goes left to right, but I tried adding a negative sign to the V equation anyway, just in case (even if it would not make sense to me).

Solution (thanks to "a concerned citizen") 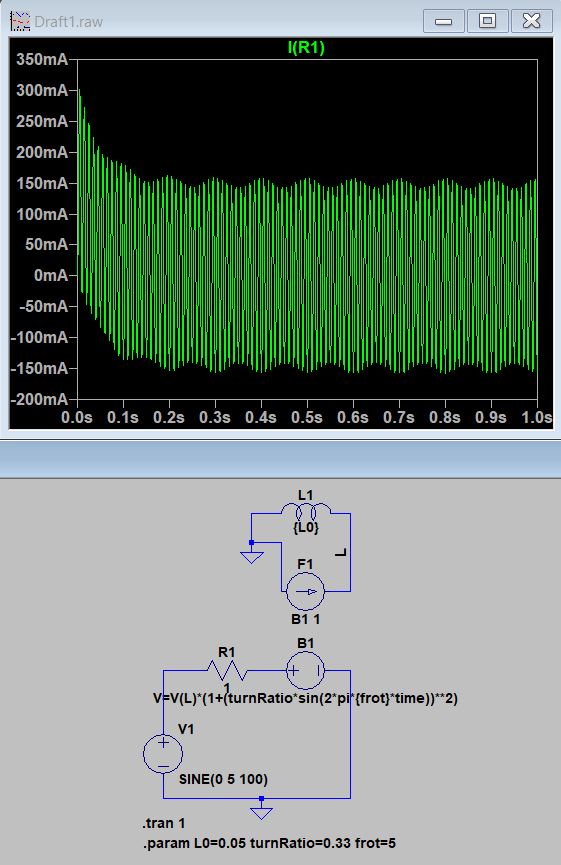 Which corresponds to the function L(t)=L0*(1+(K*sin(wt))^2), in a series RL test circuit excited by a constant sine wave.

This question deals with the builtin behavioural inductor from LTspice. In addition, here's another way of doing it, compared with the linked version:

The two cases shown are with traditional SPICE elements, L, F, and B (upper side), and with the builtin behavioural inductor (lower side). The function that dynamically modifies the inductors is (randomly) chosen to be of the form \$\frac{1}{1+f(t)}\$.

For the 1st case, F1 takes the current though B1 and feeds it into L1, and the voltage that forms across it is used as a feedback for B1. Adding any other expression (not a constant) besides V(L) would transform this into a variable inductor. Here, B1 has the expression V(L)/(1 + I(G2)), where I(G2) is \$f(t)\$. Note that LTspice discourages using "instantaneous feedback" (see the help on B-sources for more), so I'm using I(G2) instead of I(B1) in the behavioural expression.

For the 2nd case, x has the special meaning of the current though the inductor which, as shown in the other linked answer, is internally differentiated. Thus, the function of x first needs to be integrated:

x takes the place of \$f(t)\$ and the expression becomes what you see. Note that, for this particular case, the input voltage must not go below -1 V, for obvious reasons. The plots show the voltages across the two variable inductors, with V(1) slightly shifted for better viewing, otherwise they would completely overlap. V(test) from B2 is the reference equation, also shifted, showing the exactness of the match.

\$\sin^2x\$ varies between 0 and 1, which means you'll have times when your inductance will be zero; that's asking for trouble. It looks like you want to model the coupling inside a motor, so a better solution would be \$1+\sin^2x\$, and even better \$1-\mathrm{K}+\sin^2x\$. Of course, I am just speculating, it's up to you to know better.

That said, there's nothing stopping you from using the alternative method (the more involved one), and also x is not mandatory, it's just there as a helping notation. Internally, LTspice will apply partial derivatives to all the variables used.

Just as before, V(test) outputs the original time-varying formula (described in the green-text comment), while V(1) (shifted by 5 m) and V(2) (shifted by 10 m) are the resulting variable inductances.

And here is a way to use the two inductors in a random series RLC circuit:

1) The SPICE way. The solid rectangle is the "engine" for the variable inductor. It is to be used together with B1, that is B1 + F1 + L1 form an inductor, whose "interface" to the world is B1, inside the dotted rectangle. The voltage that appears at B1's pins is the voltage of the equivalent inductor. F1 + L1 can be placed anywhere in the circuit, their only connection to B1 is behind the scenes.

2) The LTspice way. It's really this simple: simply place the inductor in the circuit. As above, the dotted rectangle marks the element to use.

Both circuits are identical in terms of results: the same source (1 V / 50 Hz), the same R (10 Ω) and C (10μF), and the same equivalent variable inductance. The currents and voltages are plotted, one slightly shifted than the other to avoid complete overlapping. 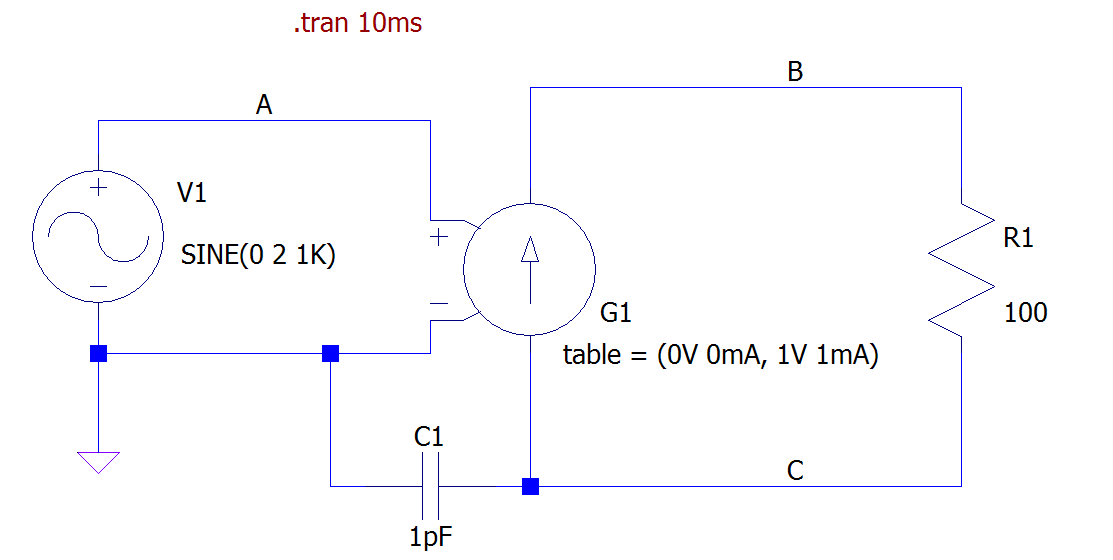 Note: the capacitor C1 is there only to avoid an error because the simulator doesn't like node C to be floating.

This is the relevant section of the online help (emphasis mine):

There are three types of voltage dependent current-source circuit elements.

This circuit element asserts an output current between the nodes n+ and n- that depends on the input voltage between nodes nc+ and nc-. This is a linearly dependent source specified solely by a constant gain.

Here are the results of the simulation: 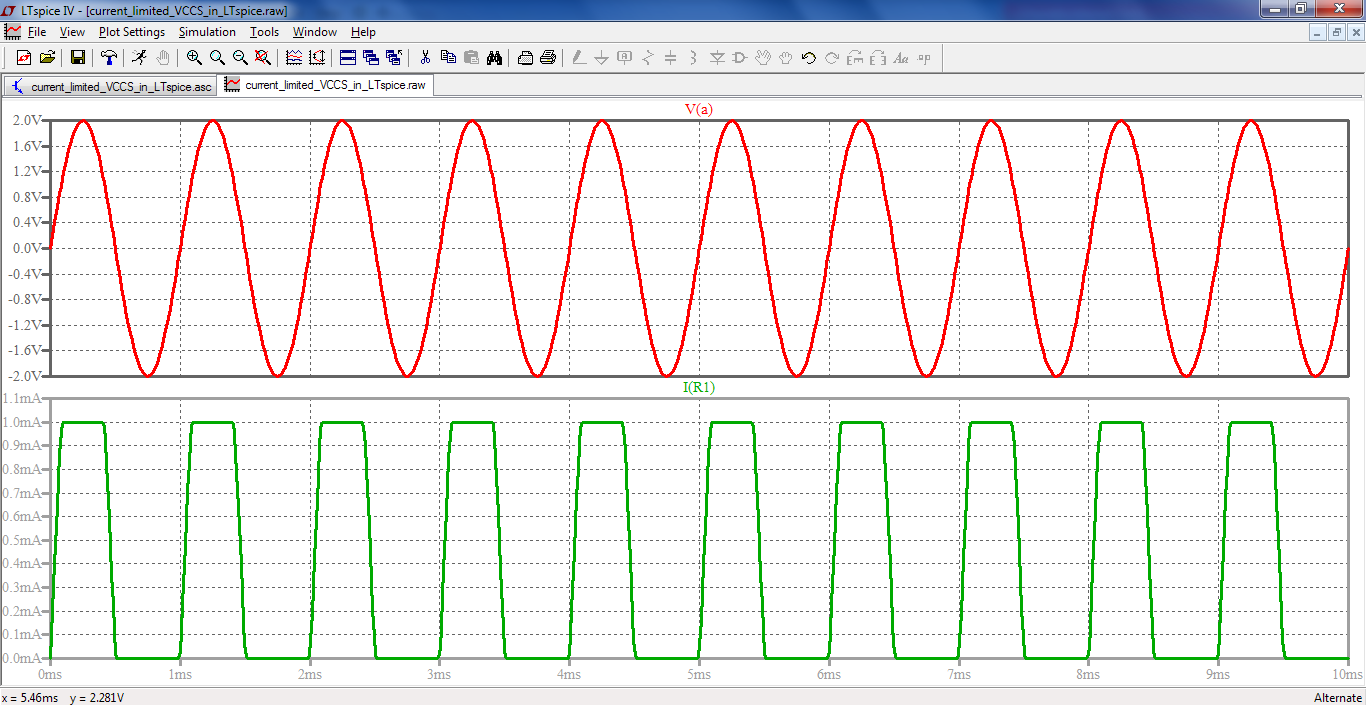 As you can see you only need to specify two points in the LUT if you just want a VCCS with an hard limiting characteristics, i.e. linear inside a given voltage range and fixed saturated limit out of that range.

The x signifies the derivative, so you have to integrate your expression, first, in order to obtain it correctly.

To verify the inductance, you can use a unity ramp current source, which will give a voltage proportional to its inductance: 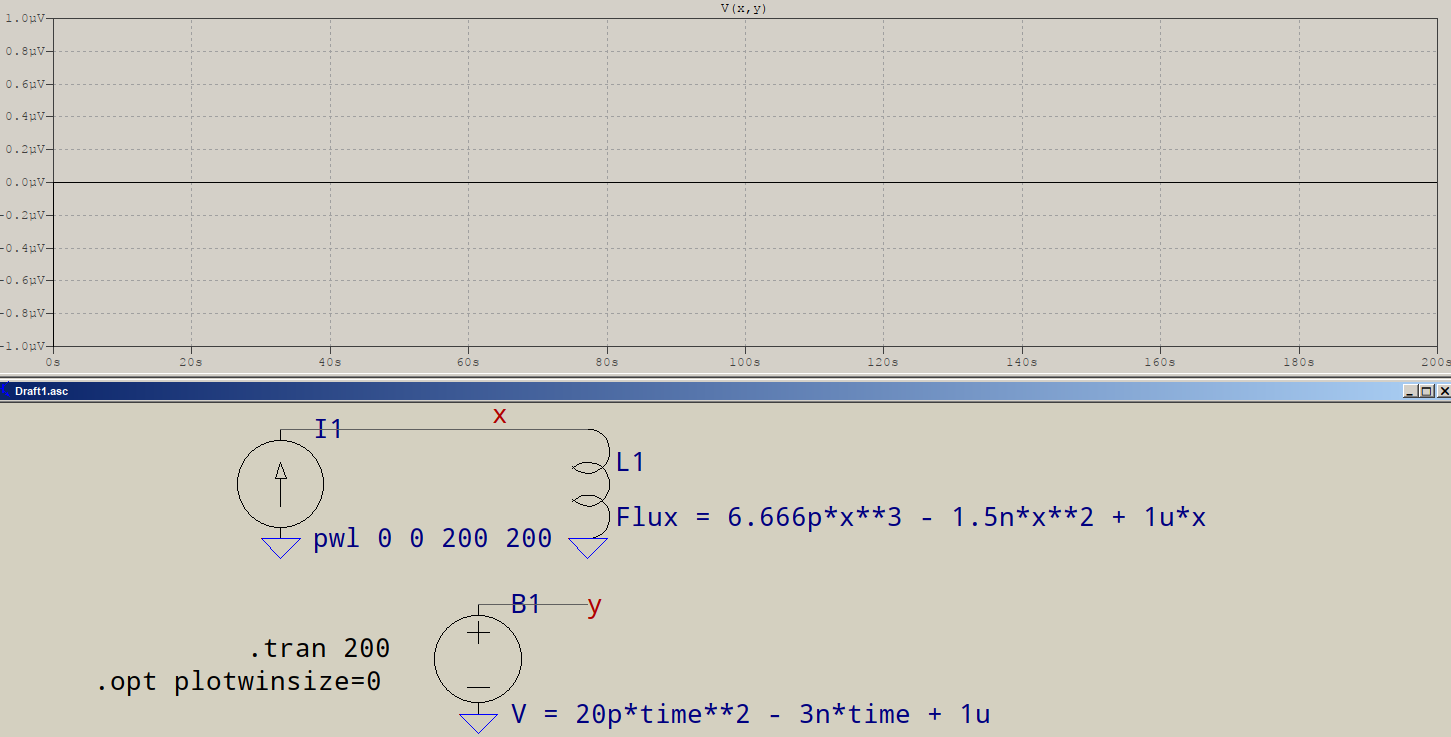 Notes (in case you want to try it out yourself):