I have a system whose transfer function is as follows

I am interested in the settling time exhibited by the system, hence the numerator is not in focus (hope I am correct there). I do know that the sixth order polynomial has no analytical solution. Hence I used Matlab to find the numerical solution and settling time. I would like to know which coefficients of the denominator has the most influence on settling time. Any ideas on how to analyze that?

You cannot find the rule you hope. Assuming the system is stable a long settling time is caused by a pole or conjugate pole pair which has near zero negative real part. You may separate from the denominator factor \$s^2 + 2As + A^2 + B^2\$ if you have complex pole pair \$A+Bj\$ and \$A-Bj\$. Let A be radically closer to zero than the real parts of other poles. When this is multiplied with the other (4th order) part of the denominator, the critical real part \$A\$ affects all but the sixth order term.

ADD after more info was inserted to the question:

So, you are able to use advanced software like Matlab and you already have made simulation runs. Go on and find a good combination of the 2 variables which you can set. I guess Matlab can be programmed to make the search for you. Unfortunately I'm not a programmer nor have such advanced software. Sorry.

BTW. Often people must take into the account also other things than the settling time. The general method is to build a cost function which is tried to be minimized.

The "standard" form you believe you have is in fact a low-pass 2nd order filter. Here's a picture that might explain things: - 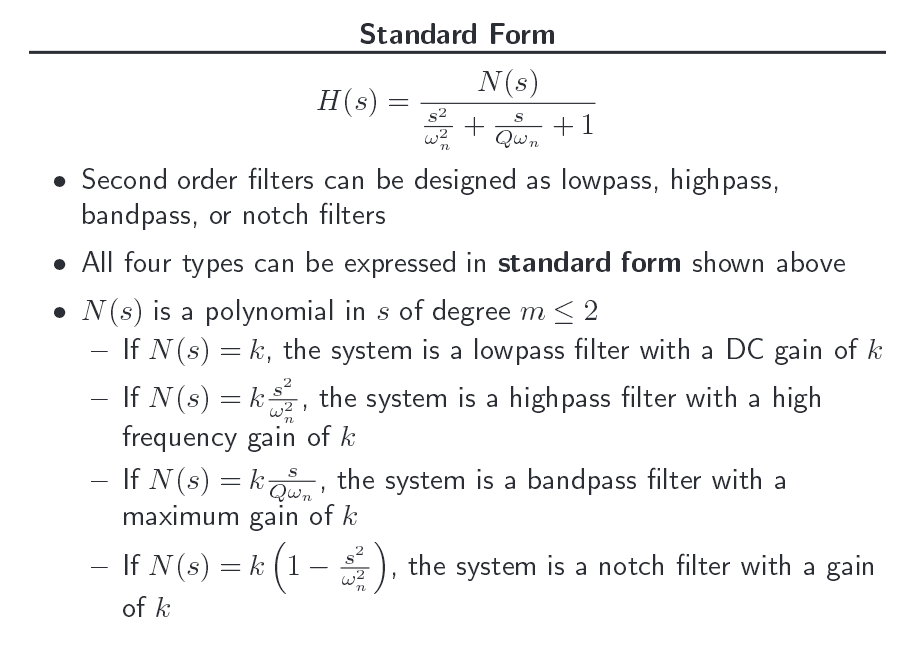 D/A could be made to be whatever you want and this can turn the filter into a low-pass or a high-pass etc..

Information taken from here and my brain

Electronic – How to rewrite a transfer function to standard form

Repeat for the denominator roots \$p_k\$, and gather the constants to the front to get the factor \$K\$. The roots you got from Wolfram Alpha are, up to the factors of \$i\$ that connect \$s\$ to \$\omega\$, exactly the \$p_k\$. Sometimes they do indeed end up somewhat hairy, but often it's possible to simplify them by identifying common factors (such as paralleled resistors, products RC that always appear together etc).

Finally, if the polynomial has root \$0\$ with multiplicity \$k\$, these will be factors of the form $$ \left(\frac{s}{\omega_m}\right)^k, $$ which you can bring to the front. The factors \$\omega_m\$ are now ambigous, as you can in principle include any of them in \$K\$, but often in practice there's some meaningful choice. For example, if you're designing a filter with a certain passband, you take \$K\$ to be the passband gain (and phase), and take the remaining part to be \$\omega_m^k\$.

Note that factorizing a polynomial (over the complex numbers) requires finding its roots. For a second order polynomial, the quadratic formula gives you the answer immediately. For third and fourth order polynomials there's the cubic and quartic formulas. The cubic formula is already quite long, and the quartic formula is about a full page in small print, so it's often not useful in practice. For orders higher than five, there is no general formula, although special cases can often be solved.

In addition to using the general formulas, the circuit topology often provides considerable simplifications. For example, in the case of two second order sections separated by a buffer, you can analyze the two sections separately using the quadratic, and the standard form of the combined transfer function is directly the product of the standard forms of the individual sections. The same applies for any number of sections separated by buffers, which is one of the main reasons that high order filter are usually designed as series of second order sections.

If, in the end, you cannot find explicitly the roots, or they're too complicated to use, you can still learn about the your circuit by studying the discriminants, which tells you about potential complex conjugate or real roots. In your specific case (assuming you roots are correct, I didn't check), the discriminant is the term inside the square roots, $$ \Delta = C_f L_2 R_f^2 + C_f L_1 R_f^2 - 4 L_1 L_2. $$ If this is negative, you have a complex conjugate pair of roots leading to a second order term, and it's positive, you get two real roots. You can divide by \$L_2\$ and \$C_f\$ to get the expression $$ \tilde{\Delta} \triangleq R_f^2\left(1 + \frac{L_1}{L_2}\right) - 4 \frac{L_1}{C_f}, $$ which has the same sign as the discriminant. From here you see, for example, that if \$C_f\$ is small enough, or \$R_f\$ is small enough, you get a complex conjugate pair.