Can a TFT Resistive screen be made/used as a multitouch screen?

I have a Android 2.2 SuperPad III tablet which comes with a resistive screen and I am developing an app that needs a few features of a multitouch screen. When testing the tablet for multitouch it fails: it doesn't register 2 different points simultaneously. I know as a fact that Android OS has support for multitouch since I have performed the same tests on a capacitive screen and all tests were successful.

Would it be possible that Android OS disables the multitouch functionality on an resistive screen tablet or is it a hardware limitation? If needed, I don't mind modifying the Android kernel to reflect my needs however I would like to know that the hardware can handle it.

It's a hardware limitation. Resistive screens measure the resistance from the top and the left, and bottom and right of the pressed point, and derive X and Y coordinates from these. 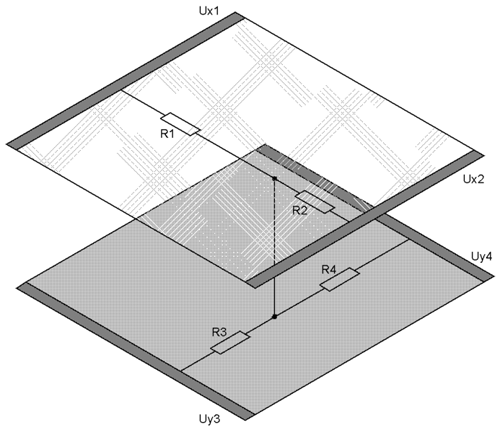 Pressing two points simultaneously can't give you multiple coordinates. It can confuse the controller, however, resulting in a complete irrelevant set of coordinates.
No matter what technology, to get multiple sets of coordinates you have to scan the grid, looking at one point at a time, which resistive doesn't.

The application schematic for the MXB7843 touchscreen controller shows the electrical model of the touchscreen as the 4 resistors on the left.

When you are looking at the image you can see that it only has physical inputs for one point so asking for two is just not there.

I think the reading is taken from the other axis. So if you want to read the X axis you apply power/ground to the X wires and read the ADC connected to Y.
If you notice in the code snippet it says power is applied to X axis but reading is taken from CH0 (RA0) and named result_y (I think the diagram may have RC0 and RC3 connections mixed up though):

You don't need such a complicated circuit. You need 4 ports and possibly two resistors.

To get the “X” touch position, the microprocessor sets Pin3 to +3.3V and Pin1 to GND (0V). Pin4 is made unconnected (high impedance) by setting it to an input or an open collector output set to high. The microprocessor uses Pin2 to read the voltage through the ADC.

Pin2 and Pin3 need to go to ADC, through a resistor if you want the control current down. Pin1 and Pin3 go to an open collector output or a regular I/O.

The resistor used on Pin2 and Pin3 will not really affect the ADC if you put a 100pF cap to ground right beside the microprocessor.

Please see the link below if only for the pictures: