The zero sequence equivalent network of a YNy0 transformer with grounded primary is shown below (source). 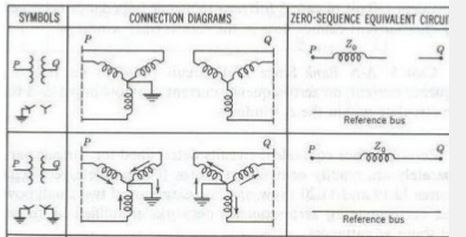 From several simulation tools, I've concluded that this is not correct. I've included a screenshot from one (Paladin Designbase). As you can see, by running an short circuit analysis (using IEC 61363). Running an analysis using standard IEC 60909, there is no line-ground fault current.

What I'm wondering is: What is the zero sequence equivalent of a YNy0 transformer, and how can I use it to calculate the fault current? 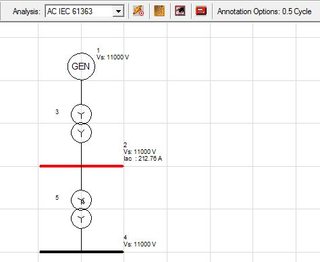 The first question to ask is: have you got, or can you obtain, the transformer's test certificate?

In IEC land (where transformers are built and tested to IEC 60076), zero sequence impedance measurement is not a "routine test" so it has to be specially requested. (Hint: If you are specifying a transformer, please ask for the test! It doesn't cost much to run at the factory, and it's quite helpful.)

The second question to ask is: does the transformer have neutral earthing resistors (i.e. LV star point earthed by a 750 amp NER)? It would be unusual (unsafe?) to have a completely floating LV star point.

The third question to ask is: does your transformer have a buried delta tertiary? That considerably changes the answer.

Notwithstanding the above, the full theory is below.

The zero sequence impedance of a Y-Y transformer depends on the transformer's construction and how the windings are earthed.

The case of interest to you is when only one winding of a wye-wye transformer is earthed, i.e. HV grounded-wye, LV ungrounded-wye, or vice-versa. For brevity's sake I'll call this a "YNy0" transformer for the remainder of this post.

NB: technically, it's possible for a YNyn0 transformer to have the LV star point brought out to a bushing, but not connected to anything, so it could also be operated in this way.

Even though the zero-sequence impedance of a theoretical YNy0 transformer is infinite, in practice, the tank of the transformer acts as a weak kind of delta winding. This is the so-called "tank delta" effect.

The table at the end of the chapter essentially says that, for a wye-wye transformer with one of the star points earthed, \$ Z_0 \approx 5 \times Z_1 \$.

A document I have from Eskom (South African power utility) says that a YNy0 transformer has \$ Z_0 \approx 10 \times Z_1 \$, again citing the tank delta effect.

The following text is quoted from Eskom DGL 34-617, "Network planning guideline for transformers".

The zero sequence impedance of a transformer installation is dependent on:

Finally we have old faithful, the J&P Transformer Handbook.

From the J&P Transformer Handbook, 12e:

... the zero-sequence impedance varies considerably according to the construction of the transformer and the presence, or otherwise, of a delta winding.

The zero-sequence impedance of a star winding will be very high if no delta winding is present. The actual value will depend on whether there is a low reluctance return path for the third-harmonic flux.

For three-limb designs without a delta, where the return-flux path is through the air, the determining feature is usually the tank, and possibly the core support framework, where this flux creates a circulating current around the tank and/or core framework. The impedance of such winding arrangements is likely to be in the order of 75 to 200% of the positive-sequence impedance between primary and secondary windings. For five-limb cores and three-phase banks of single-phase units, the zero-sequence impedance will be the magnetising impedance for the core configuration.

Should a delta winding exist, then the third harmonic flux will create a circu lating current around the delta, and the zero-sequence impedance is determined by the leakage field between the star and the delta windings. Again the type of core will influence the magnitude of the impedance because of the effect it has on the leakage field between the windings. Typical values for three limb transformers having a winding configuration of core/tertiary/star LV/star HV are:

At least one piece of software has this as the default, if you select a "core type" wye-wye transformer (as opposed to "shell type".)

Electronic – What determines what type of short-circuit current is highest

Impedance earthing is commonly used to limit earth fault current and hence touch/step potentials. So it's not unusual to see a switchboard with 25,000 A three-phase prospective fault current, but only 500 A single-line to ground fault level. On certain low-voltage substations with fault levels of 10 kA, I have seen the earth fault level limited to as little as 4 A.

Think of a single phase transformer feeding an open circuit on the secondary. The AC is a normal AC signal then suddenly the AC signal instantly becomes 0 V (this represents the short on the primary feed). There will be some amount of magnetic flux (aka energy) in the transformer core that will push a current back out of the primary windings into the 0 V AC source.

If the transformer is perfect in all respects (other than it has a magnetizing inductance), the current will flow into the "0 V" indefinitely BUT there are of course resistive losses so this current will be an exponential decay to zero. If there is no leakage inductance on the primary winding, the 0 V (aka short) will ensure that there is nothing seen on the secondary other than the cessation of the AC waveform when it instantly falls to zero.

If there is leakage inductance on the primary (normal of course) then there will be a small kick-back voltage seen on the secondary due to the magnetizing inductance of the primary not being perfectly shorted to 0 V.

With or without a load it won't make a difference - there will be a small kick-back voltage seen on the secondary as the magnetic flux (and current) exponentially decay to zero.

It should also be noted that if the AC falls to zero volts at the very peak of its waveform, the current in the magnetizing inductance of the primary is zero and no effect will be seen. This is because, at that instant in time, the flux in the core will also be zero. If, on the other hand, the AC voltage halts at a zero-cross (and stays at zero), the flux in the primary will be at a maximum and the effect described above will take place. At all other points the effect will be proportionally less.