I am making a PCB where the goal is to keep BOM as low as possible and also the cost to the lowers. It has proven to be quite a difficult task but I am at a final stage now.

My PCB needs to be programmed or interfaced depending on the situation and I do not want to add connectors or get the end user to solder extra wires on so i thought the edge connector would be the perfect option.

I have been looking around and there are thousands of options and I am not sure what the best design would be. My final PCB is 0.8mm thick and 4cm(W)x4cm(H) but could make it larger for this purpose and needs at least 8 pins but more would be great.

First thing that comes to mind is using the old floppy connectors or an ISA slot or even PCI. What should I keep in mind when designing this on my PCB and what would the cheapest connector be?

Since you're not happy with the 50 mating cycles of the PCI connector I thought what you really need is connector which goes on and off easy. Have a look at this one: 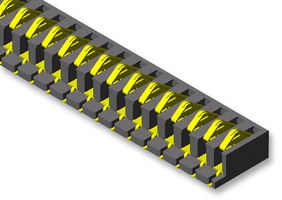 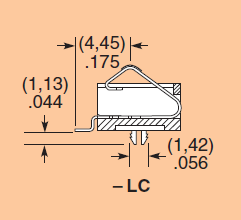 warning: not cheap! USD 5.82 at Digikey, and at Farnell even GBP 7.91, that's 12.40 dollar! (I've always known Farnell is expensive, but they keep surprising me.) The good news is that you only need one.

I've used those in a few projects at work, as a board-to-board connector. The contacts are spring contacts, they don't fix the top PCB mechanically. (In my project the top PCB was fixed with snaps in the enclosure.)

You would have to make a small tool which aligns your PCB with the connector, and you simply push your board onto the tool and push the "program" button.

And more good news (possibly): all your contacts are on the same (bottom) side of your PCB. This type has a 2.54 mm pitch, and is available with 2 to 30 contacts, but there's also a version with a 1.27 mm pitch (if you can make your programming tool to that precision). The 2.54 mm pitch will give you a length of less than 2 cm though.

edit re the snaps I mentioned
Snaps in the enclosure are a cheap way of mounting a PCB, since you don't need mounting holes or screws. The operator just has to push in the PCB, and that's that. Takes less than a second, far less than mounting 4 screws. 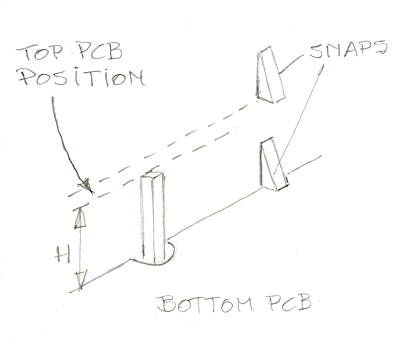 I don't have such an enclosure here, but this quick sketch should make clear how it works. Underneath the bottom PCB there are also stops like the one shown for the top PCB. So to mount the bottom PCB you just push it down the two levels of snaps until it hits its stops. Then push in the top PCB. This of course doesn't have the recesses to pass by the first level of stops so it's fixed at the level higher than the bottom PCB. If you use the Samtec SIB connector to connect the two PCBs the distance H between them is 3.8 mm, enough for most SMT components.

All very nice, but not for you. First, it's damn hard to remove the PCBs once they're snapped in place. Second, this is a custom injection mold, which will only cost you 10 000 to 15 000 dollar for an entry level mold, for a limited series.

What you need is just two walls at right angles so you can align the board to be programmed by placing it in the corner. Have a ledge in one wall you put the PCB underneath and push the other side down to make contact with the connector.

the thing to consider with thermocouple interconnections is that each additional disparate metal type junction you include in the circuit may introduce error.

while looking for PCB connector options like you were, I came across this thread, which describes, for example, the benefit of K-type over J-type when connecting to copper PCB traces. have a read: http://www.nerdkits.com/forum/thread/2779/

any given connector you consider will have some combination of metals, & not just the core metal, but also the plating, if any (gold, tin, etc).

i also stumbled across these people selling PCB-mounting thermocouple connectors, with varieties for each thermocouple type: https://www.labfacility.com/pcb-mounting-thermocouple-socket-iec-p168-pg71/

Electronic – What’s the name of this PCIE power connector

Molex Mini-Fit family is probably similar to what you're looking for: http://www.molex.com/molex/products/group?channel=products&key=minifit_products

Many distributors are selling these. In Europe, you can try TME: http://www.tme.pl/