I'm reading a book about computer architecture, and it says that, in clocked edge-triggered devices, the contamination delay is usually nonzero, and that the contamination delay for registers is assumed to be greater than its hold time, "giving it the important property that its inputs and outputs can be read and written simultaneously (that is, by similar devices sharing the same clock input)".

Is this correct? The part that I'm not understanding is why this fact gives to registers "the important property that its inputs and outputs can be read and written simultaneously (that is, by similar devices sharing the same clock input)".

From my textbook, Digital Design and Computer Architecture, Harris and Harris, pg. 88 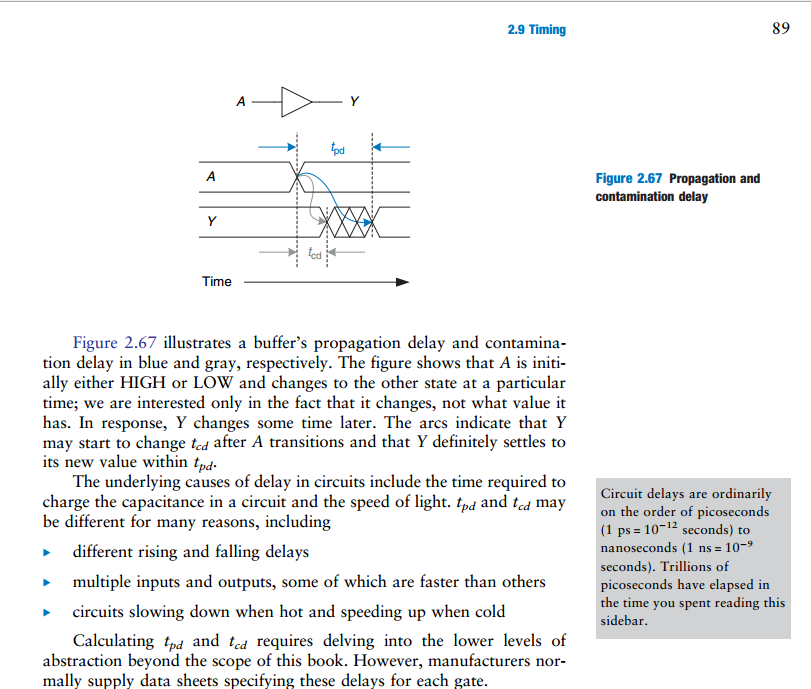 That much is probably obvious to you.

Actually, it sounds to me like you are referring to contamination delay. You said contamination delay is the amount of time measured after an input changes that the output remains valid. If you mean the previous output, then yes, because that means the same thing as until the output begins changing to the new value.

About your question as to how this deals with reading and writing from a register. This confused me for awhile, but I think it makes perfect sense to me now.

So what you said about contamination delay and hold time is correct. This problem applies to when flip-flops are daisy chained. And if you think about it, it also only applies to when you want to read and write at the same time.

Imagine a circuit with just 2 flip flops. It doesn't necessarily have to be a register, just that the first flip-flop is the storage element that is written to, and the 2nd flip-flop is the storage element that reads the first one. If you only needed to read and write on different clock cycles, then none of this delay stuff would matter, because reading would always occur on a different clock cycle when the output of the first was stable, and couldn't change since writing can't occur in the same clock cycle.

However if you wanted to write a new value to the 1st flip-flop, as well as read the previous value properly into the 2nd on the same clock cycle, then that is the exact situation you described, where if the contamination delay of the first was less than the hold time of the second, then writing to the first would thereby contaminate the reading of the second. It makes perfect sense. The read has to occur successfully before the write begins to change what's being read, or else the value gets lost.